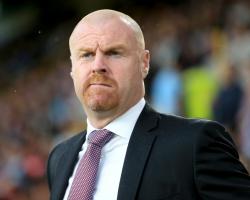 The Clarets splashed out an initial ÃÂ£6million on Brentford striker Andre Gray during the previous summer window and Dyche confirmed Burnley will probably exceed that figure before their business concludes in September.

A midfielder remains top of Dyche's wishlist following Joey Barton's departure to Rangers but attempts to land Jeff Hendrick, Dale Stephens and Steven Defour have so far come up short.

With coffers flush from a share of the top flight's new television deal, Premier League clubs are spending vaster sums than ever before and Dyche accepts Burnley may have to part with a figure greater than the club has previously spent.

"It's likely we'll have to (break our transfer record)," he said.

"I think it was Jose Mourinho that said: 'The market has no rules, you either get in it or you don't'

That is the simplest way of putting it.

"There's no governance over it, there's no reason or adjustment like a housing market, you can't predict the transfer market

One deal can ignite a number of different situations."

Having been prudent in that instance, the east Lancashire side are in a stronger position financially but Dyche has still been stunned by the rise in value two years on.

"It's tough for all concerned, the market's gone up again," he added.

"Everything has gone up from two years ago

Some of the numbers for players are astounding

But we've earned the right to be here, so we want to push the model, push the journey and push the players to be ongoing."

Dyche has constantly spoke about the need to resist gambling with Burnley's future and once again preached that mantra as he prepares to face a Swansea side who have just shelled out ÃÂ£15.5m.

"The only way to guarantee it is to throw a lot of money at the situation, some clubs do that and this club could do that, but it would be counterproductive in the longer term to the bigger picture, and I understand that," Dyche said.

"It's difficult as a manager

If the club could afford to do it or we had an owner worth ÃÂ£500m and he said: 'Don't worry about the finances', I would do it, because I know the club would be secure.

"This club has got to be run at certain levels

It's appropriate for the size of the club

I also have my own moral instinct about what is right and appropriate and I think that is right for this club."