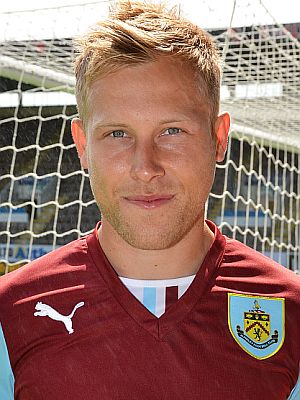 There were just four goals to select from. There were two from Danny Ings, who has already won three monthly awards this season, one from Michael Kightly, his first in Burnley colours, and the Arfield goal.

In previous months this season there has been a clear winner and December was no exception. Ings was never in the running. Both his goal from the corner against Blackpool and the early second half equaliser at Leicester won just 1.9% of the vote each.

Kightly's match winning finish against Barnsley brought to an end a run of six games without a win. In other months it might have won the vote but received 26.1% of the vote.

That left Arfield who received the ball from Ben Mee on the left hand side of the pitch and outside the penalty box in front of the Jimmy Mac stand. He turned and curled the ball past the helpless Matt Gilks into the far corner.

His goal was the clear winner, polling 70.1% of the vote and it joins the other four monthly winners with a guaranteed place in the Goal of the Season vote in May.

The current vote is for the man of the match against Sheffield Wednesday. You can vote either via the front page of the site or the VOTING POLLS page. Player Ratings can be left on the message board.