It was hardly one of the more exciting games of the season and was looking like a 0-0 long before the end, but it did give us that point and it did provide us with our ninth clean sheet of the season, something that most Burnley fans would have thought unlikely when we kicked off last August.

However, the frailties at the other end of the pitch were in evidence again as once more we failed to score. We haven't found the net in any of our last four home games for the first time in just over ten years and it clearly is this inability to score goals that has cost us this season.

With relegation confirmed last week, this was the first of the two remaining games of the season before we drop back into the Championship, and it was no surprise that Sean Dyche named the same team that had won at Hull last week. It was the same seven subs too. 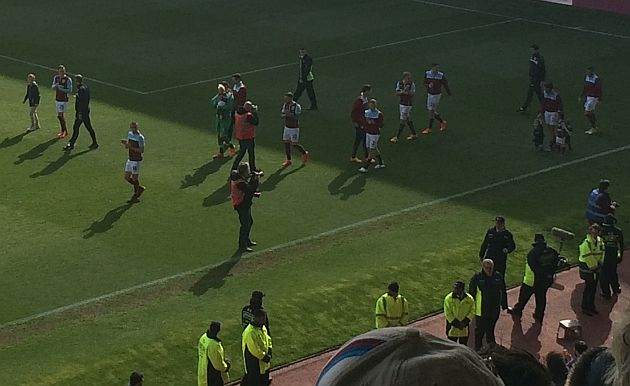 We lined up against a Stoke side that included Peter Crouch on the bench. Surprisingly, our club had informed us yesterday morning that we were the only one of the current Premier League clubs that he's never scored a goal against. That's not totally accurate; he's twice scored against Burnley previously for two different clubs. I suppose it's the sort of information we've had from Alan Shearer recently, that Matt Taylor hadn't taken a penalty for five years when he'd scored one on the Turf last season, and last night's gem that Danny Ings is now on a free transfer.

They came out looking like a team from the land of giants, led by Ryan Shawcross who had apparently been ruled out by injury.

All the talk in the week was, despite the fact that relegation had been confirmed, that there would be no let up and we would go strong again. I don't think anyone could question that given the way we started the game.

In the first twenty minutes or so it was difficult to believe we hadn't scored at least one goal. Jack Butland made three saves, there were shots blocked, one effort was cleared off the line. The best of the saves was the one that denied David Jones his first goal since March of last year.

Here really was our season encapsulated in a quarter of this game. We played some really good stuff, created chances, but the big screen, had it been working, would still have been showing Burnley 0.

But the best chance of the first half fell to Mame Biram Diouf. He actually got to Jonathan Walters' cross from the right but somehow managed to head wide of a gaping goal.

A long range effort flew wide just after as Stoke finally got into the game in the last few minutes of the half, but if either had gone in it would have been so unjust. We'd been the better side in the first half.

The second half was a much quieter affair and for the most of it a goal didn't seem too likely at either end.

Just a couple of minutes or so in, a poor ball across their box from a defender looked as though it had played Ashley Barnes in, but Shawcross barged the Burnley striker out of the way. Referee Oliver, who would have been looking at a red card, astonishingly gave nothing. It wasn't the first thing Shawcross had got away with either.

Stoke's best opportunity came when Kieran Trippier lost possession. The ball in was missed by both Michael Duff and then Jason Shackell but Tom Heaton was quick to deny Diouf who looked a certain scorer.

The aforementioned Crouch came on but I don't think he won a header of note to be honest but there was to be one last opportunity from the visitors, a strike from outside the box that I thought was going in. Heaton was unsighted, and to make things worse it bounced just in front of him, but he gathered the ball at the foot of the post and it was all over at 0-0.

There was just time for Fredrik Ulvestad to make his debut as a late substitute, the first Norwegian to don our colours since Christian Kalvenes. He came on for David Jones and had a couple of good touches. I reckon he'll play a part next season.

It was our fourth 0-0 home draw following on from those against Man United, Sunderland and Spurs, but we've just struggled to pick up the points because of the lack of goals. Far too often we've failed to score and our total of 27 goals hasn't been good enough. 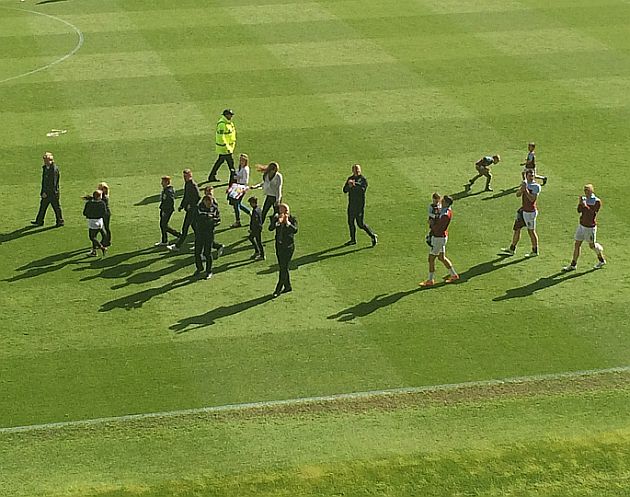 There was just time for Dyche to lead out the players for the traditional walk round the pitch with Michael Keane looking as though he's got a new job as George Boyd's childminder.

We are not all over yet; there's a trip to Villa Park to look forward to next Sunday when hopefully we'll bow out in style with a win at a ground where our last success was in 1973. That's another one of those daft stats; we've only played there four times since.

As for the Turf; the next time the doors open for competitive football it will be back to the Championship. I doubt we'll be one of the favourites to go down this time and we'll all be hoping for another promotion chase which in turn will bring another opportunity to face the country's biggest clubs.

There have been some good moments at home, probably none more so than the win against the Champions. It's just been too damn difficult to find the wins.