It was a Mad Stad as memorable season ended

The game was all about Reading and their determination to clinch that last play-off place, and that's why we were honoured with the presence of the Sky cameras yet again, but there was no way this Burnley team of ours was going to go out with a 'holiday' attitude as Sean Dyche went strong again, naming an unchanged team and the same substitutes, to try and end the season with four successive wins.

With all the games kicking off at 12:15 p.m. it meant an earlier departure than usual to Berkshire with my pick up at 6:15 a.m. some six hours before kick off. I had this notion ahead of the trip that the traffic shouldn't be too bad at that time in a morning but then remembered the chase to get into QPR on time back in February after hold ups on the M40.

The only hold up we had this time was us missing the A34 turn off and quickly opting to go further down the M40 to Wycombe and down to the M4 from there. 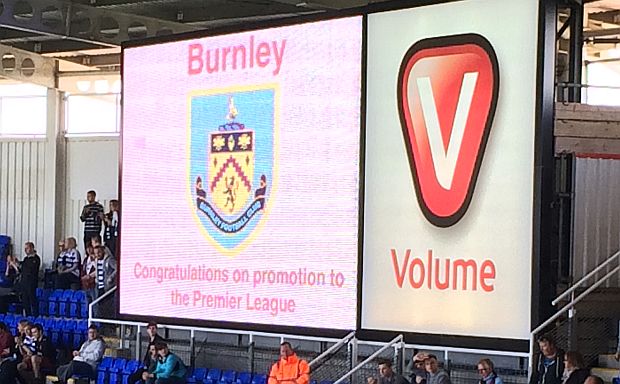 I actually enjoy passing Wycombe. Of all the clubs in the lower divisions this is the one, for some reason, that always reminds me of days past. I mentioned it in my QPR report and don't apologise for repeating it.

Our promotion season under Stan kicked off back in August 1999 at Wycombe's Adams Park. It had become a regular venue for us but by the time we kick off next season it will be over 15 years since we last played there.

Not that long ago we were struggling to get points there. Three days ago we were playing our last game before heading into the Premier League whilst Wycombe were fighting, successfully as it happened, for their very Football League lives.

We were soon parked up and outside the Madejski Stadium. It's known to the locals as the Mad Stad and my word it was a mad place to be at the end of the game after some miscommunication led the home fans to believe they'd made it into that top six.

This is a club I'm not particularly fond of. They've messed us about with tickets on a number of occasions in previous seasons and this year were very late in delivering our allocation.

But it was a big well done to them on Saturday for the welcome they gave us. Outside and inside the ground I saw signs welcoming us and congratulating us on our promotion. All the bar staff wore t-shirts with 'Harry Potts Way' on them.

To cap that, a pre-match announcement to congratulate us was greeted with applause from all around the ground as the message pictured above was shown on the big screen just to our right.

Mind you, I wasn't so much saying well done Reading just a few minutes into the game. With a need to match Brighton's result, they went at us straight from the kick off and dominated the first few minutes.

There was one almighty shout for handball down at the far end in th first minute. It wasn't; if anything Jason Shackell had been fouled, but the overhyped Reading players could have landed themselves in some trouble with referee Mick Russell for their over the top protest.

The frenetic start from the home side didn't last and soon it was the Clarets dictating play. We were moving the ball well with some crisp passing moves, and we'd most certainly got ourselves on top when we won a left wing corner.

We used a tried and trusted one with Michael Kightly and Danny Ings combining but it didn't fully work and then Reading had the good fortune to get a deflection from David Jones that dropped kindly for them.

The rest was all about breaking with pace. Jobi McAnuff was in his own box but got onto the ball, sprinted down the right and saw his cross turned into his own goal by Kieran Trippier. It was just the second own goal we'd conceded all season; the previous one had come against the same team in the 2-1 home win back in October.

I recall Dyche saying that he'd told his players at half time at Ewood that it didn't matter than we were a goal behind. That sort of message must have got to the players here because we just carried on playing. Within four minutes we were level and not long after that we'd gone in front.

Scott Arfield got the first. We won a free kick on the right hand side and Kightly saw the opportunity to play a quick ball to Dean Marney. The midfielder got into the box on the right and crossed. It was deflected by a couple of Reading defenders but only to Arfield who made no mistake from the penalty spot.

Ings got the winner in that Blackburn game. He hadn't scored a goal since, partly because of an injury that kept him out for five games, but he ensured that he got himself back on the scoresheet to score his 21st league goal of the season.

Again it was excellent work from Marney but Ings had a lot to do when he received the ball just outside the box, and in the D. From my vantage point a shot didn't look on but once he'd created that bit of space for himself and turned it was clear where the shot was going, right into the bottom corner.

He might have got a second too right on half time as he ran on to a ball played through by Ben Mee. Maybe his first touch just took the ball that bit too far away from him but a lot of credit goes to the goalkeeper Alex McCarthy who got a block on it. Ashley Barnes couldn't quite get to the rebound and it was deflected away for a corner.

Still, 2-1 up at half time and we'd played some outstanding football. I suspect the Reading fans couldn't have been too hopeful for their chances as the players went in for half time.

We played well in the early part of the second half too although there was one scare when Tom Heaton came out for a ball and dropped on it just inside the penalty box. Reading screamed for a free kick but the television pictures confirmed he'd kept the ball inside.

A free kick from the right was headed down by Pavel Pogrebnyak not too far outside the box. Before anyone else could react Garath McCleary hit an unstoppable volley into the top corner.

If we were having a vote for the best goal against us this season then I think it would be a very likely candidate, and the goal gave Reading some real hope.

They pushed forward now. Shackell cleared off the line with Heaton beaten and then Heaton saved well with his leg, but we had our opportunities too.

With Brighton being held 1-1 at Forest it looked as though Reading were getting just what they needed as the game went into stoppage time. Then came news of a Brighton winner.

Reading won a corner and up came the goalkeeper. Heaton saved again and that was that, and the two teams had to settle for a 2-2 draw.

Reading players fell to the ground in despair at the final whistle but then a roar went around suggesting a Forest equaliser at the City Ground. Many Reading fans were dancing with delight, and the idiots who had been to our right were desperately looking for some trouble.

Then, the big screen confirmed the result from Forest and the atmosphere changed again. Once those idiots had been removed the remaining Reading fans on the pitch came over to applaud us. Their offers of congratulations were genuine.

I didn't want to leave. I really didn't want our season to end. I was still inside when the Reading players and staff came out with John Madejski for a lap of appreciation.

Finally it was time for the exit. I paused, thought of all the games this season and how brilliant it had all been. It had been beyond my wildest dreams and if anyone says they'd expected it then I suspect they are not being that truthful.

I've enjoyed this season so much. Each game has had its moments, some more than others. Coming home and reporting on them has been more pleasurable than in any other season since I got involved online in 1999.

And Saturday was one last day to be amidst the Burnley fans who have been every much a part of it, and not forgetting the dolphins. They were there in force too.

I suppose the last line of this last report of the season should read - see you in the Premier League.