On a tense Sunday lunchtime we found ourselves behind for over half of the game to an almost predictable Jordan Rhodes goal, but captain Jason Shackell and then leading goalscorer Danny Ings helped bring sheer pandemonium to the Darwen End as the four and a half thousand or so Burnley fans erupted before saluting the winning team for well over half an hour after the final whistle.

It was a day that none of us there are ever likely to forget as strangers hugged, as co-chairman John B, watching from the lower tier of the away stand, got soaked with beer as he celebrated, and the Burnley fans milked every last drop of the celebrations.

I think it might be appropriate to start with a question and answer session.

Q: Who was the last Burnley manager to beat Blackburn?

Q: Who scored the goals when Burnley last beat Blackburn?

Q: Who was the Burnley chairman when we last beat Blackburn?

Q: What was the Burnley's team the last time we beat Blackburn? 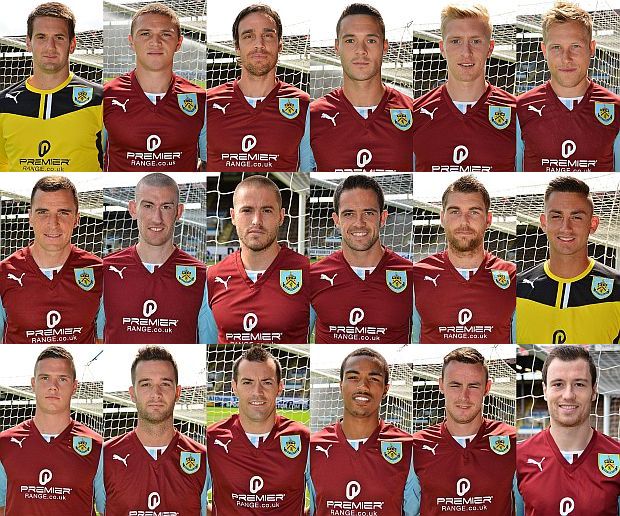 It was a long day for our fans. Even for myself living just a couple of miles from Turf Moor it was a seven hour stint from leaving home to arriving back. I was emotionally drained and so spent most of the evening sat with my feet up reliving the whole thing via Sky. And who said Sky+ was not a great invention?

Once at the Turf our group of six found each other outside the Park View and made our way to the back of the Longside to find our bus for the trip. I have to say, as much as I hate this being forced on us, it was a smoother operation. The buses were clearly numbered, if not in order, and there were stewards on each bus to ensure you boarded the correct one.

Last year, on arrival at Ewood, I was met with a frightening crush once through the turnstiles. This year it was virtually empty as we were amongst the first there. I'm certainly not one for spending any more money than I need to there so, armed with my own food and drink, I made my way to what was going to be my seat (or standing area for the afternoon).

Diverting my eyes from the big screen (I have no desire to watch a compilation of Blackburn goals) I saw the team warming up. I didn't think having the players wearing cheap looking t-shirts advertising season tickets was the best of ideas though.

"Robbie's on the tele," I heard. We used to have Robbie Blake; now we've got Danny Ings. I loved Robbie; he was the little magician who could get you off your seat and this was where he scored his last ever Burnley goal, giving us the lead in our Premier League game prior to the Allardyce cheating tactics coming into operation.

Thankfully the news came through that we did have Danny Ings when our line up was confirmed. I don't think many people who have second guessed the manager incorrectly. It was, as expected, same again. You have to go back to the home game against Sheffield Wednesday on 18th January when it wasn't this eleven.

Gary Bowyer, their monotone manager, made five changes to their side that had so wonderfully been stuffed by four at Bolton. Such was his panic for this game that he opted to make two late signings. One of them, Michael Keane, started, the other, Liam Feeney, was on the bench and might just have broken Ade Akinbiyi's record when he eventually did get on.

The game started quietly for the first 20 seconds before the ball went out for a throw in front of the Riverside. That was the point when the home fans on that side of the ground decided it was appropriate to introduce the live stock.

We soon learned that the otherwise excellent referee Mike Dean didn't know how to catch the hen that had appeared on the pitch. You would think the Ewood staff would have been trained in this now but it was left to one bloke with a coat to try and get it off the pitch.

Eventually it left of its own accord and we later learned that the otherwise excellent referee Mike Dean didn't know you had to add time on at the end of the first half for any fowl on the pitch.

The game sort of settled down and I thought we were doing OK and we even had the ball in the net on six minutes when Sam Vokes converted a ball in from Scott Arfield. The celebrations were quickly ended when the assistant's flag went up for offside.

It's close but it does look as though he's got the decision correct. Under last season's rules in this fixture that would have been at least eight yards onside.

For a period we looked the better side but, whereas in recent games we've really taken a grip in midfield,  we just couldn't get the same sort of command in that area and it did lead to the home side starting to get a bit of the play. They created a couple of opportunities that led to nothing but midway through the half came the killer moment as far as we were concerned.

The ball was played into the box to Rhodes. I did think our central defenders, who really did have good games, might have closed him down quicker but their leading goalscorer ended his recent drought, hitting his shot into the bottom corner.

It was just what we didn't want and it took us a while to recover from it but we did recover and the usually dependable Ings might just have got us level a few minutes before the break. He latched on to a horrible back pass (or a good one from our point of view) but with just former England goalkeeper (and despite his self promotion this week he'll remain a former England goalkeeper) Paul Robinson to beat he got his shot too close to the keeper who was easily able to block it before Ings hit the rebound wide.

We  had a scare right on half time when Mee cleared off the line but the whistle blew after just one minute of stoppage time with us trailing 1-0.

A quiet start to the second half saw neither side able to get on top but with just nine minutes gone we got the escape of our lives. Jones, who had played in this game last season for the opposition got his pass horribly wrong and did no more than play Rhodes in.

I feared 2-0; I thought that was that, and stood delighted as Rhodes saw his shot come back off the post. We were still in it at 1-0 down and we were soon to take advantage of it.

We needed a change and I felt Treacy for Kightly should be the order of the day, but Dyche thought otherwise; it was Wallace who came on for Kightly with Barnes getting his longest stint yet as he replaced Vokes who'd played for Wales in midweek.

Almost immediately Dunn was hooked. On came Feeney who was yellow carded within 19 seconds for a bad foul on Arfield. Looking at it again he could so easily have been sent off.

Blackburn got away with that but their luck was just about to run out. We won a free kick on the right hand side for a foul on Barnes. Last season Shackell scored for us from a Wallace free kick. This season Wallace's free kick was headed in by Shackell.

The fired up captain celebrated with his team mates but there was better to come, much better. From a throw on the right we got a ball in. Robinson flapped and it went out to Arfield on the left. He and Mee combined for Arfield to cross again. It got through to Wallace who saw a shot blocked.

Wallace got the ball back, pulled it back, Barnes got a touch and Ings fired it home. From my position right behind that goal I can confirm it was a magnificent sight to see that ball cross the line. Still on my crutches, I was caught out a bit with the first goal celebrations, but I was ready for this one as one young fan to my left went absolutely ballistic.

Blackburn huffed and puffed a bit  but nothing more than to give Heaton a couple of routine easy saves and one very good tip over from a long ranger.

We'd got this one won. The Darwen End roared us on. We counted ever second, to the point that one fan just behind us thought the four minutes stoppage time was complete with just 20 seconds of it gone.

We weren't letting this one go and finally that magical moment when Dean, and I said he was excellent, blew the final whistle to send us into the same sort of raptures not witnessed since the same referee did likewise at Wembley not far short of five years ago.

"We're not going home," we sang, interspersed with 'We want Dyche".  We waited and we waited and eventually the Ginger Mourinho came out for a curtain call, followed by Ings who was desperate to get away for his Sunday carvery.

The journey home was much better than in previous years. For a start we were happy and secondly we didn't have to drive down an A666 full of Neanderthals. The journey was slow; I was concerned that we needed to get back to the Turf to ensure safe delivery of the three points.

How about these for a couple of facts? In 18 days time it will be four years since they've beaten us and did you know that on our last twelve league visits to Ewood we've won seven, drawn two and lost three.

They are not hurting us any more.

In the last couple of weeks or so I've played this game down as much as I could. I said, quite genuinely, that the home games against Forest and Derby were more important. I thought I meant it but don't you believe it. Yesterday was the big one. Yesterday was the one we've all waited for.

I am so delighted all those of our supporters who have never had the opportunity to witness us beating Blackburn can now say they have.

When we beat Manchester United in the Premier League a friend of mine said to me as he left the ground: "It can't get any better than this," but I said it could. Yesterday it did - Burnley beat Blackburn. Don't ever forget it.