Some 0-0 draws are good games, even exciting affairs; others are games that look to have 0-0 stamped all over them for most of the ninety minutes. This one, I can confirm, was very much in the latter category with neither side ever really threatening to get the upper hand on the other.

We had one or two early chances and towards the end there were one or two balls dropping for them in the box, but I can't imagine anyone leaving the ground at full time could have any complaints at their respective teams failing to score and picking up one point.

I was a bit concerned when we left Burnley yesterday morning. The weather was just as it is today, wet and windy with no real sign of a let up. It did improve and earlier in the West Midlands that meant we were able to walk to and from the ground in dry conditions and didn't suffer the possibility of having to shelter from any sweeping rain during the game having been allocated the awful lower tier of the Steve Bull Stand, an area we've avoided for the last nine years.

The journey down the M6 was trouble free, and it's not often that can be said, and we were at our chosen watering hole for lunch just after midday. Having been tipped off about Tipton prior to last season's final game at Villa, we gave Mad O'Rourke's Pie Factory another visit yesterday with minted lamb for me this time. I'm still prohibited from enjoying anything alcoholic but I'm told the real ale selection was again outstanding.

It's only a short journey from there to Wolves, or would have been had two locals not opted to allow their cars to collide, and we were even able to find a parking spot quickly, often a rarity when visiting Molineux.

We got into the ground to learn that the team was the same but we had two changes on the bench. Well again Michael Kightly replaced Fredrik Ulvestad and we had a K rather than a C with Kevin Long coming in for Chris Long.

The starting line up, with Tom Heaton in goal, meant the Clarets' captain was making his 100th league appearance for us since becoming Sean Dyche's first permanent signing in summer 2013 and that's 100 consecutive appearances with his only time off the pitch at Brighton in his fourth game when he was sent off.

It was Kevin's Long's first appearance in the match day squad since suffering a ruptured anterior cruciate injury on New Year's Day at Newcastle. Dyche explained the change after the game; Michael Keane was carrying a knock and this was the reason for the extra defender on the bench.

The Football League this year made the decision that clubs would all observe a minute's silence on the same day, whether at home or away, and yesterday was four days before the 11th day of the 11th month.

Both teams wore poppies on their shirts, to be auctioned by the League to raise funds for the British Legion.

The minute's silence, which included the playing of The Last Post, was impeccably observed. It's something I have to admit to finding quite emotional. Maybe it's my age and maybe it's because both my mum and dad served during World War II but there was certainly more than the odd tear in my eyes as we remembered those who lost their lives.

It all started alright for us and home goalkeeper Emiliano Martinez was called into action three times in the early part of the game. None of them were difficult saves but he kept out a Scott Arfield effort and then two from our in form striker Andre Gray. What we couldn't have known at the time was that he'd already made more saves than Tom Heaton would be called upon to make in the entire game.

The first of them came midway through the first half when he tipped over a Benik Afobe effort which had come in from a tight angle and soon after a free kick went straight at him. 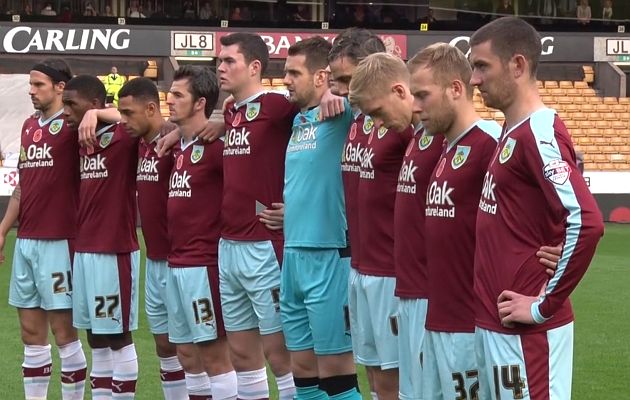 But neither side created a clear cut chance in the first half and it was no surprise when we went in at 0-0, and with the Burnley fans thankful for a break with the low sun having caused us problems for most of the first half.

The second half, I'm afraid, offered even less than the first 45 minutes, although at least we could now see without constantly having to shield our eyes.

Wolves made a couple of changes, including bringing on Carl Ikeme as sub goalkeeper. Both Sam Vokes and Ben Mee were replaced with injuries and I have to make mention of the Wolves fans as both those changes were made, either side of Matt Taylor coming on for George Boyd.

Vokes, who was replaced by Rouwen Hennings, and Stephen Ward, who came on for Mee, are both former Wolves players. David Jones had received a warm ovation from the home stands before the game and first Vokes and then Ward, who ensured he applauded both home and away supporters at the end, received similar as one left and one came on to the pitch.

To be honest, none of them made much difference and it was only in the final minutes that Wolves gave it a right go, pushing men into the box and getting the ball in. A couple of half chances fell to them but they didn't trouble Heaton with them; otherwise we defended it well with the two central defenders in fine form, particularly Michael Keane who I thought was outstanding.

It all ended with the expected 0-0 but much has been said since of the pitch and the fact that Wolves chose to cut the grass AFTER the game. It was long, it didn't make passing the ball easy at all and I would suggest was a big contribution to the poor quality of football on offer.

The whole thing was flat and, to be honest, I've never been to Molineux before and known it so flat in the stands. Last time we went there was real anger but there didn't even appear to be that passion yesterday.

It's another game unbeaten and we've just picked up 14 points from six games since the last international break. That's a very impressive return and here's another impressive stat. Since losing 1-0 at Middlesbrough on Boxing Day 2013, we've won nine, drawn ten and lost just one of twenty away Championship games.

Joey Barton suggested after the game that there were a lot of positives to take out of the game but admitted: "It wasn't a spectacle for the neutrals but we've shown our resilience again. We can play a lot better than that but credit to Wolves because they've been under the cosh a bit here lately. They rolled their sleeves up and put a performance in for their manager today."

He added: "I don't think I'll remember that one when I've got my pipe and slippers in 30 years' time but we had to dig deep in the second half and we came away with a point."

I don't think I could put it better than that, maybe Joey should be writing the guest reports.

It's another break now and we'll be the last to play when things do resume with a Sunday lunchtime affair against Brighton in front of the Sky cameras. It's third v second with the league's only unbeaten team visiting us.

The teams yesterday were;