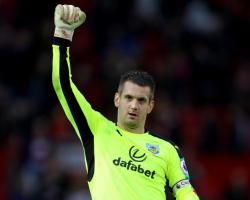 The visitors had hauled themselves back from an early two-goal deficit through Christian Benteke's 82nd-minute penalty, only for Barnes - an 85th-minute replacement for Jeff Hendrick - to smash the winner from a Johann Gudmundsson cross

But Connor Wickham reduced the deficit with his first touch after replacing Jason Puncheon on the hour mark, then Benteke looked to have sealed the Eagles' revival before Barnes intervened in spectacular fashion

Burnley grabbed the lead with less than two minutes on the clock when Matthew Lowton broke directly from a Palace corner and crossed for Gudmundsson, whose ball back into the box was eventually tapped home from close range by Vokes

Palace responded by forcing a second corner from which Joel Ward came close, before Benteke set up Jason Puncheon for a rasping effort which was well saved by Heaton at the second attempt

Heaton, star of the Clarets' goalless draw at Old Trafford last week, saved his side again two minutes later when he produced a great low save to deny Wilfried Zaha

But all the Eagles' pressing came at a price as they left themselves alarmingly open to the counter-attack, and it was a weakness Burnley exposed again in the 14th minute

If the visitors were shell-shocked to find themselves 2-0 down they hardly showed it, with Townsend next to blaze a clear chance over the bar from a Ward corner

But they remained distinctly vulnerable at the other end, with Mandanda going some way to redeeming himself when he saved well from Hendrick after fine work from Arfield in the box

Vokes was at the centre of most of their forays forward, his effort from a tight angle saved twice by Mandanda as Hendrick rushed in to assist, then blazing another effort high and wide from eight yards

Pardew had no choice but to act and he did so with a double substitution which paid off spectacularly just before the hour mark, as Wickham slammed his first goal of the season into the roof of the net from a Yohan Cabaye cross

After surviving a spell of Burnley pressure, Palace grabbed their equaliser in the 82nd minute when Lowton handled a Townsend ball into the box and Benteke stepped up to hit the leveller past Heaton - only for Barnes to dash their hopes at the death

There was still time for Townsend to be denied by a post, but Burnley held on to the three points in a frantic finish