League win number nine for manager of the month Mullen 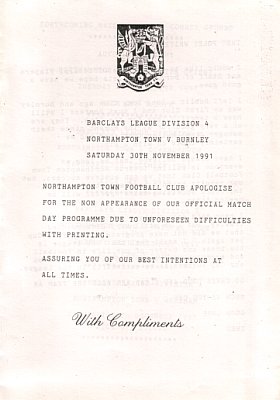 There were problems at Burnley General Hospital during the week as a young man of 17 frightened staff, visitors and patients, including children, with his strange behaviour. It went on for quite some time as he charged around banging on doors, riding up and down in lifts and generally making a nuisance of himself.

He was escorted out of the building three times but kept on returning, so security staff called the police which led to him hiding in the grounds. He was eventually arrested when he  attended A&E, presumably having had a wait of at least a couple of hours.

He appeared in court the following morning and said he didn't think he was doing any harm. Trevor Grice, defending him, said that his client didn't want to go home and wanted to sleep at the hospital but gave no reason why.

Mr Grice said: "He now accepts that his behaviour was unacceptable and wrong. He is of limited ability and did not intend to do anyone any harm." He was bound over to the sum of £100 to behave himself for twelve months.

There had been two burglaries at St. Hilda's School on Coal Clough Lane. In the first £25 worth of chocolate was stolen and in the second a collecting tin for the NSPCC was taken containing £279.

A 12-year-old boy was charged and he admitted to three further offences. Two of those were from houses in Cog Lane and Girven Grove whilst the third was taking four pairs of slippers worth £20 from TJ Footwear at Victoria Mill.

The case was adjourned for reports before sentencing and the boy was remanded for assessment to the care of the local authority.

Thefts from one school but some good news from another. At Todmorden Road Primary School the children had been stamp collecting and had collected enough to pay for the training of a guide dog for the blind.

The children were delighted when they received a special shield to mark their achievement and it was presented by local lady Mrs Joan Pickard who went to the school with her guide dog Fudge.

A few weeks previously, a planning application for a wind farm at Coal Clough Farm, King's Causeway, Cliviger was rejected. The application had been submitted by Renewable Energy Systems, part of the Sir Robert McAlpine Group.

After consideration, the company had resubmitted with spokesman Mr Peter Quilleash saying: "We hope this new proposal will be more acceptable to the council, and to those who opposed the original application." He confirmed that substantial changes had been made.

In January 1987, Terry Waite, the special envoy to the Archbishop of Canterbury, was taken hostage in Beirut. On 18th November 1991 he was finally released and that so pleased one Burnley lady that she held a party to celebrate.

Mrs Mona Petty had closely followed the story of Mr Waite and was so excited at his release that she organised the 'Terry Waite is Free' party at the day centre for the elderly at Burnley General Hospital.

Hospital staff laid on sandwiches and trifle and, although Mr Waite wasn't able to attend, one nurse was persuaded to sing some popular songs for the guests. Michael Jackson's 'Black or White' was number one at the time but I suspect that was not one of the songs that the nurse belted out.

If that was a quiet party then I suspect there was a livelier time to be had at the Wood Top in Accrington Road where landlady Margaret Marsden was holding a special night to raise money for Children in Need.

She decide to have a 1950s night and agreed that beer would be sold at 1955 prices which meant a pint for 1/2d (approximately 6p). The only catch was that locals could only pay the lesser price if they turned up with old money.

People were searching their houses for old coins and more than enough were found for it to be a great night. The only bad news was that the chippy didn't join in and so people had to pay full prices for their supper on the way home. The night's events became even better when it was revealed that over £1,000 had been raised.

As the team prepared to leave for the game against Northampton Town, goalkeeper Andy Marriott expressed his disappointment that he would have to return to Nottingham Forest at the end of his loan.

"I am very disappointed," he said. "I have enjoyed myself, my time with Burnley has been brilliant. I don't think I could have found a better club to come to on loan. The fans have been fantastic.

The Clarets had to go into the game without inspirational captain John Pender who had been forced off in the cup win at Doncaster with a hamstring injury. Mark Yates came on as a substitute with Andy Farrell moving into the back four and when Pender failed a fitness test it was same again with Farrell at the back from the start.

The win came about because of two strikes from Mike Conroy which were enough to move Burnley into second place in the league with Barnet going down to a home defeat against Chesterfield.

Burnley started so well and should have gone in front after 15 minutes. Time and again we beat Northampton for pace and on this occasion Conroy, Steve Harper and Roger Eli all broke clear. Harper found Eli but his ball back to Conroy was cut out and the danger was cleared.

Five minutes later and Northampton had no answer. John Francis was back to his belligerent best and he broke from his own half and stormed up the pitch leaving Northampton defenders for dead. He ended the run with a ball through for CONROY that was inch perfect and the striker slammed the ball home past home keeper Barry Richardson.

Just before half time the brilliant Francis came close to doubling the lead after another great run, but, after beating three defenders, the ball just wouldn't drop and the chance was missed.

The first half had seen Burnley play some excellent stuff and we should have gone in at half time with a bigger lead than 1-0. The second half was, unfortunately, a different story.

Goalkeeper Richardson was at the centre of so much for Northampton as he bombarded us with kicks that seemed to get longer and longer. It wasn't all one way but the home side were in the ascendancy and Marriott was forced into one brilliant save to deny Phil Chard.

With five minutes to go the inevitable happened. The ball was played into the box, headed down for Greg CAMPBELL who hammered home off the underside of the bar.

Northampton immediately pushed forward for a winner. Straight from the kick off they got the ball up into our box but it was cleared by Farrell. The clearance found Conroy in the centre circle and he laid it out to Harper on the left.

He played the perfect ball in for CONROY who had charged upfield. He controlled the ball on his chest and then made no mistake to restore the lead. That was the sucker punch. You saw it coming as soon as Northampton committed too many players forward.

Conroy and his team mates danced in front of the packed away end as Burnley fans went delirious, including one fan waving a crutch.

It still wasn't won. Northampton twice came close to a second equaliser but when referee Flood blew the final whistle it was Burnley's game, they were Burnley's points, it was a ninth successive league win and we were up to second.

The fans mobbed goalkeeper Marriott at the end of what did proved to be his last ever game for Burnley. He'd sprinted the full length of the pitch to celebrate with more than 2,000 who had made the journey to the County Ground.

The police moved in, but realising there were no problems they allowed fans onto the pitch and Marriott was chaired off shoulder high.

"We made life very hard for ourselves in the second half and I hope the lads have learned a lesson from that," Mullen said at the end.

"We scored a great goal in the first half and I felt we created two or three very, very good chances to put the game beyond them by half time, but, as I've told the players all along, if they haven't got the devilment to put those sort of chances away they can cause themselves big problems.

"Northampton caused us a lot of problems in the second half. They changed things tactically and the 'keeper's big kicks meant we had a lot of defending to do. Although we gave away what I thought was a soft goal, the rest of the time we defended brilliantly, but we had to."

The teams at the County Ground were;

The big result for Burnley was definitely Chesterfield's 2-1 win at Barnet that saw us move up into second place. Dave Lancaster, often a scourge of the Clarets, proved to be our hero this time with the winning goal.

Leaders Mansfield had a comfortable 3-1 home win against Walsall with Phil Stant netting twice and there were also two goals for Dave Bamber as Blackpool kept up the pressure with a 3-0 success against Halifax.

Burnley now had a break from the league with the next two games a friendly against Dynamo Stavropol followed by the FA Cup 2nd round tie against Rotherham United.