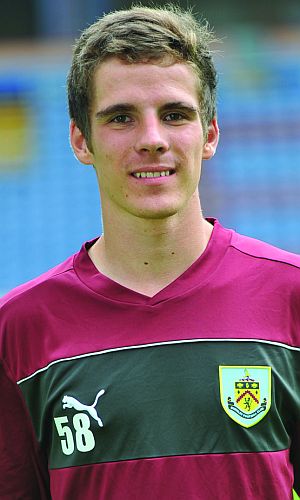 Luke Gallagher, Luke Conlan, Cameron Howieson and Jason Gilchrist are all missing as Terry Pashley and Andy Farrell field a side made up of eight first year scholars and three members of the under 16 team.

We've already played Morecambe this season, winning the away game 5-0 with leading goalscorer Gilchrist netting a hat trick with the other goals coming from Howieson and full back Charlie Holt (pictured).

Holt has been playing in the centre of defence recently and in the cup defeat to Rochdale partnered another full back Luke Conlan.

With Jack Errington ruled out this season the centre of defence is proving a problem but the good news tomorrow is that Alex Whitmore returns.

We've moved up into sixth place in the table now with 15 points from eight games. Morecambe meanwhile are next to bottom having collected just three points from their nine games, all from draws.

They also have the worst defensive record in the league but come up against a Burnley side who, without Gilchrist, include no players who have scored more than two goals this season.