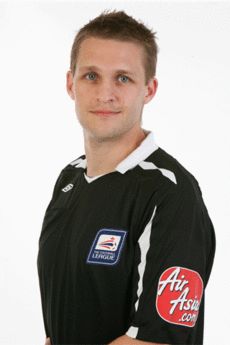 He was the referee for the Turf's first cup tie of the season when we faced Burton Albion in the 1st round of the Carling Cup back in August and it was his penalty decision, for an infringement outside the box, that lifted the game out of the gloom with almost an hour gone.

Charlie Austin had definitely been fouled, but Pawson was let down by his assistant who should have been signalling it outside the box.

We've seen him since at first team level, away from home, and his performance didn't win him a place on Gus Poyet's Christmas card list. Just eight days before Christmas he sent off two Brighton players in the first eleven minutes of the game.

In total this season he's shown 90 yellow cards and 9 red cards in 28 games. Of those yellow cards, 45 have gone to both home and away team players.

He's only sent off two players since the Brighton game. The first came in his next game when he dismissed Blackpool's Barry Ferguson in their 3-0 defeat at Birmingham.

The other came in his last game four days ago a Morecambe who lost at home 1-0 against Shrewsbury. Morecambe's Kevin Ellison and Chris McCready both received yellow cards, as did Shrewsbury's Matthew Richards whilst Jon Taylor (Shrewsbury) was sent off for violent conduct.