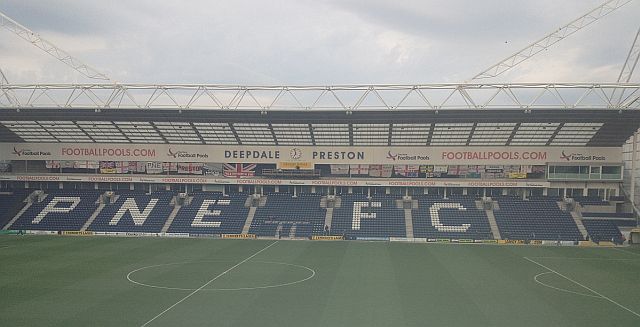 Tonight represented our last chance of a trophy when we visited Deepdale for the Lancashire FA Youth Cup Final against Preston North End. It was Preston who pipped us for the Youth Alliance League title last week, ending the season with a one point lead over us, and tonight they were worthy winners in this final.

At times it looked like a game too many for us, for a team still missing captain Tom Anderson and with Adam Evans and Cameron Howieson also unavailable. You wondered just why so many of this team were forced into action in a reserve game just two days earlier as Preston rested up for the big game.

Yet we started the better and it could have been a different story had we been able to grab the lead during the first twenty minutes. That chance came with just five minutes gone when Luke Gallagher somewhat fortuitously found Alex Mullin in front of goal but he couldn't quite get his shot away.

Even so, we'd started so brightly and were causing Preston some problems but eventually the home side came into the game and in truth, from then, we never really threatened to win it.

They caused us some real problems with their corners but to our credit we dealt with them brilliantly with goalkeeper Josh Cook and central defenders Alex Coleman and Jack Errington in top form.

Such was the quality of defending that Preston weren't able to muster too many clear cut opportunities but they came ever so close with one effort which looked to be heading into the bottom corner until Cook got down to save well.

No goals at half time was probably just about fair but Preston certainly looked a different proposition in the opening stages of the second half and this is when the game was won. Even so, Shay McCartan broke clear at one point but could only hit the ball across goal with support arriving late.

Then came the deciding goal. Luke Clark played the ball through and Brandon Zibaka got onto it to finish well, giving Cook no chance.

We stuck to our task and worked our socks off to try and get back into the game but a second Preston goal always looked more likely than an equaliser although right at the end we came so close with a Coleman header after the central defender had gone up front.

It wasn't to be. Preston won the cup and they deserved to win the cup. I just wish we could have played this game with a fully fit squad and one that hadn't been playing as many games as we've done in the last couple of weeks.

I'm sure our lads were down in the dressing room tonight after the game. They so wanted to lift this trophy to at least give them some reward for this season. What they can do is lift their heads with pride because they've been an absolute credit to our club this season and hopefully many of them will continue to do in the years to come with so many of them getting professional contracts.

We share their disappointment tonight but we also applaud them for what they've given us this season. Well done lads.