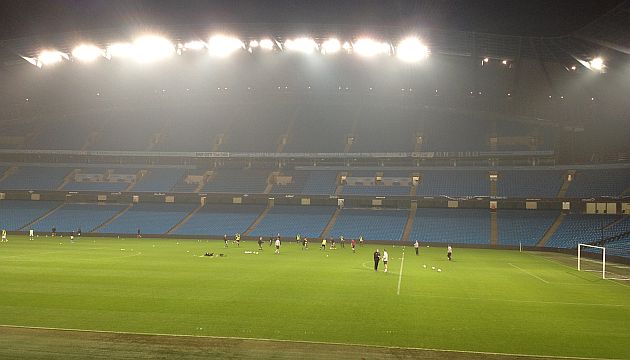 It was a brave effort and, despite the class shown by some of the City players at times, it was only in the last quarter of an hour of the game that City got the goals to take them into the last sixteen.

I don't think there can be any denying that, by the final whistle, City were deserving of the victory but nothing should be taken away from the performance of our lads out there tonight who gave it everything.

In front of a sizeable following from Burnley, some sadly showing no interest in the game at all, Terry Pashley made one change from the team that had beaten United in the last round with Brad Jackson, whose cross provided us with the winner, replacing Kevin Ly recently returned from Australia.

Nathan Lowe had played in the holding role in the previous round but he was pushed further up the pitch tonight in a 4-2-3-1 formation that saw Cameron Howieson and Luke Daly as the central midfield two behind Jackson, Lowe and Jamie Frost. Howieson and Daly, I thought, both had very good nights.

We nearly made the perfect start and maybe should have been in front within the first two minutes. Jason Gilchrist forced an error out of a home defender. He looked to have delayed for too long but eventually played the ball to Jamie Frost in the box but he couldn't keep his shot down and the chance was gone.

It was some time before we got another chance at goal as City dominated possession. At United we came up against a side that played at a tempo but here it was a more patient approach from City who at times over passed the ball and perhaps were too intent on looking for the perfect goal.

Let's take nothing away though from our defending. The back four all did extremely well including Manchester City fan Charlie Holt. So well did they do that Callum Jakovlevs had a reasonably quiet first half.

The game did burst into life in the latter stages. Gilchrist forced two good saves out of City goalkeeper Ian Lawlor. The first was at the expense of a corner and the second he parried which they were able to clear.

But the closest we got to a goal came right on half time when Jose Pozo latched onto a back pass. It all looked confusing in the six yard box but we got it away and got in at half time level, and fully deserving of being level.

The second half proved far more difficult for us. City really did dominate the play and I can't recall one real occasion when we might have threatened a goal. We couldn't get enough of the ball but again there weren't too many clear cut chances and we continued to defend well.

But they had that extra class in their side, the sort that the money Manchester City have can buy, and with thirteen minutes remaining they got in front. Jackson lost out on the touchline deep into the City half.

From a quickly taken throw in the ball got up to Marcos Lopes, who scored for their first team in the FA Cup on Saturday. From just inside the Burnley half he went on a run that took him beyond our defence before slotting the ball into the corner of the net.

In truth it looked game over for us but to our credit we stuck at it only to concede one more three minutes from th end as Pozo who finished superbly at the end of a run to complete the scoring.

It was definitely game over now and many of the crowd took the opportunity to make an early exit. They didn't miss anything in stoppage time. By then we were a beaten side but able to hold those heads up high again as they had done Burnley Football Club proud once more.

This team is out of all the cup competitions now and have only the league to concentrate on. I hope they do really well in the remainder of the season. There looks to be some real potential in this team and in these two cup ties they've certainly taken the chance to show that. Well done to them.