A poor night in Barrow but where's Blatter's technology? 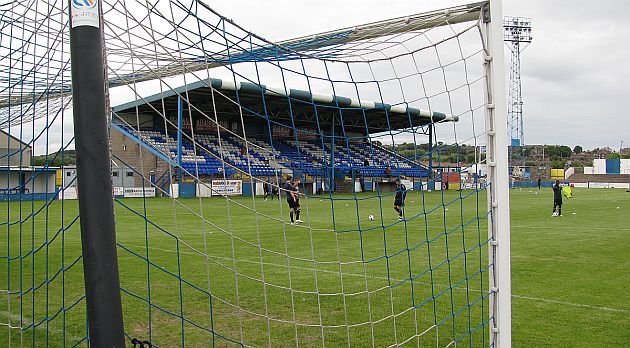 The young Burnley side certainly met their match against a Barrow team who were much stronger, quicker, sharper and by some distance the better side.

They ended last season in 13th place in the Blue Square Premier League and their intention this season is to improve on that. It always meant it was going to be a difficult night for a Burnley side that had lost three players from that which won at Mossley on Saturday.

Wes Fletcher was ruled out with an injury whilst both Luke Conlan and Shay McCartan are away on Milk Cup duty with Northern Ireland. The loss of both Fletcher and McCartan left us weak up front but Conlan's absence meant a defensive shuffle with players out of position.

Aryn Williams moved from right back to left back to cover for Conlan with central defender Jack Errington coming in at right back. Jason Gilchrist played on the right hand side of three attacking players behind Joe Jackson who found himself with precious little support.

The home side included former Burnley players Ben Hoskin and Alex-Ray Harvey in their line up. Ben was named at right back but Alex was listed as a trialist although suggestions were that he will sign for Barrow once his contractual obligations at Burnley come to an end at the end of this month.

They took the lead just past the quarter hour and it was all down to an Errington back pass that fell short for Conor Mitchell and left Adam Boyes with the simplest of tasks and he made no mistake.

There was no real response from the Clarets. We didn't cause them any problems at all and things got worse when Mehdi Lazaar was forced off with an injury and replaced by Luke Gallagher.

Six minutes from half time, Barrow doubled their advantage and again it was Boyes who scored from a ball played in from the left wing.

Not much changed in the second half and we were probably fortunate not to concede again on a couple of occasions but when the game livened up with one or two robust, shall we say, challenges we did come into things for a short time.

The nearest we came was when Gilchrist latched onto an Adam Evans ball in from the left and got a shot on goal. Barrow did well to keep it out.

There was to be no comeback unfortunately and the home side dominated the rest of the game and scored a third on 78 minutes and it was a very poor goal from our point of view with substitute Obi Anuoro able to rise totally unchallenged to head home a free kick.

Just before that we might have had one of the more spectacular goals of the season when Dave Swarbrick hammered a shot from fully 40 yards that smashed against the underside of the bar, bounced down and then out.

Did it cross the line? We'd no idea. Where's Blatter's goal line technology when you need it?

The teams tonight were;