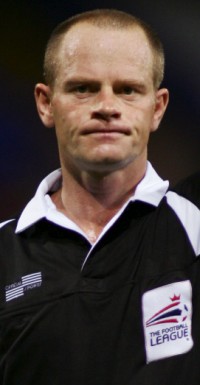 Woolmer is now in his mid-40s and became a Football League referee at the start of the 2004/05 season meaning he's now enjoying his eight consecutive season in the league.

Despite this our paths haven't crossed too often and today's game will be only his fourth Burnley game.

As you can see below he refereed our home defeat to Sheffield Wednesday, which was on New Year's Eve 2005. We lost that game 2-1 with future Clarets Chris Eagles and Graham Coughlan scoring for Wednesday.

He was the referee for our win at QPR in the promotion season and more recently he took charge of what proved to be Brian Laws' last game as Burnley manager at home to Scunthorpe in December 2010.

In that first game in 2005, with us 2-0 down, he yellow carded Garreth O'Connor for diving in the penalty box as he went down in a challenge with Wednesday goalkeeper Nicky Weaver. However, as he did so the assistant was frantically signalling a penalty and Woolmer changed his decision with O'Connor himself scoring from the spot.

Other than that, there have been few problems with him in the three games and, although we suffered three yellow cards at QPR, he's a referee who doesn't usually get his cards out too often.

This season has seen his yellow card count increase and in 34 games to date he's yellow carded 116 players whilst also sending off six players.

Of those yellow cards, 52 have gone to home team players and 64 to away team players. Three of those red cards have come in his ten Championship games this season, all three of them in the same game and, hardly surprisingly, involving Brighton.

In their 1-0 win against Leicester at the Amex in February they had Matt Sparrow sent off whilst both Jermaine Beckford and Neil Danns were also shown red cards.

Woolmer's last game was also in the Championship, Hull's 2-1 home win against Middlesbrough on Easter Monday. There were two yellow cards in that game, for Hull's Liam Cooper and Corry Evans.