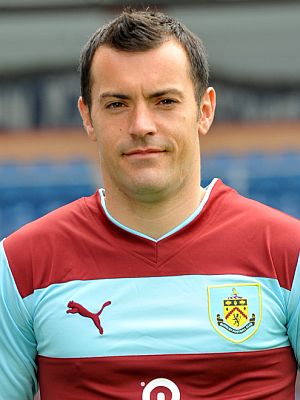 It was the perfect free kick from the Scotsman that flew into the top corner, right in the postage stamp and possibly even clipping the bar, giving home goalkeeper Jack Butland no chance of keeping it out.

That goal proved to be the winner of the Clarets Mad Goal of the Month for December, winning 44.8% of the vote.

It was a two horse race all the way that Wallace eventually won, beating Sam Vokes and his goal at the beginning of the month that rescued a point, and a fully deserved point, in the local derby against Blackburn.

That Vokes header from a Junior Stanislas cross won 39.1% of the vote and that left the three remaining goals picking up the remaining votes.

Danny Ings got my vote with the first at Birmingham. I described his touch to bring the ball under control and beat Curtis Davis as being very Robbie Blake like. It polled just 9.8% and the two remaining goals, against Derby, both of which could have been given as own goals taking the last two places with Michael Duff's goal (3.4%) just beating that scored by Charlie Austin (2.9%).

Wallace's goal will automatically be included in the Goal of the Season vote along with the other monthly winners which are Dean Marney (August v Port Vale), Austin (September v Millwall), Martin Paterson (October v Crystal Palace) and Marney (November v Hull).