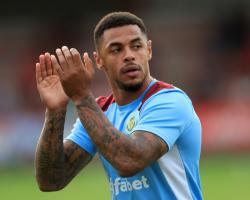 Gray has already been charged with misconduct by the Football Association as a result of allegedly homophobic and distasteful tweets posted between January 9 and March 11 2012.

According to the Observer, Gray began the tweet: "I hate lightys!"

'Lightys' is a reference to people of mixed race and is widely considered a derogatory term.

He has until 6pm on Wednesday to respond to his FA charge, which could lead to a fine or lengthy suspension.

In one tweet, Gray wrote: "Is it me or are there gays everywhere? #Burn #Die #Makesmesick"

He later issued an apology in which he admitted he had made mistakes in the past.

He said: "I have a lot of regrets regarding a number of things I've done in the past and realise I have made some big mistakes, none more so than these tweets, but I would like to stress that I've worked incredibly hard to completely transform my life since that time.

"To clarify, I do not hold the beliefs written in those tweets whatsoever

I can assure everybody that I am absolutely not homophobic and as said previously I can only apologise and ask for forgiveness to anyone I offended."