​Here we go then. The Football League has kicked off, the Community Shield is done and dusted. Football is back, baby!

While the good stuff is back in your eyeholes once again, it does mean there is less than a week left of #thegossip. Savour every flimsy re-hashed, desperate, clickbaited rumour while you can, they won't be around forever...

Here's the word on the web this Sunday. 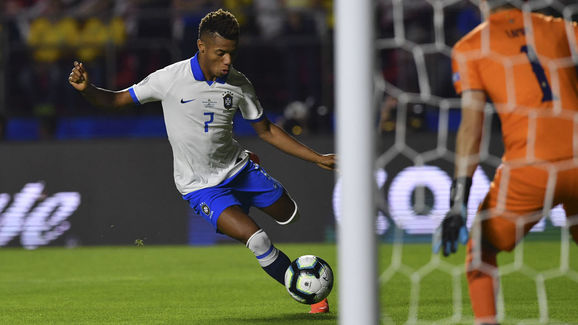 The Brazilian enjoyed a prolific season last term, with his 12 goals and 15 assists helping Ajax to the Eredivisie title and the Champions League semi-finals and, as a result, he has been linked with every major club worth their salt in the last two months or so.

Ajax want him to stay and had offered him a new deal, but Yahoo in Spain say that a £47m received from United has now complicated matters, with the player now weighing up his options.

Steve Bruce Faces Battle to Get Ahmed Elmohamady for Newcastle ​Newcastle's appointment of Steve Bruce as their new manager has gone down like the heaviest of lead balloons with the Magpies fanbase, and if tabloid reports are to be believed, then the recruitment team on Tyneside seem to be similarly disillusioned with the new boss.

According to the ​Sun, Bruce wants to bring his old pal Ahmed Elmohamady to the club this summer. However, since the Egyptian is 31, his signing would fall outside of the club's transfer remit. They would prefer to look at younger players and have a bid in the works for 24-year-old positional alternative Emil Krafth.

Bruce was with Elmohamady at Hull and later Aston Villa before his dismissal in October, with the player going on to play a key role in their promotion back to the Premier League - but whether or not he will be allowed another reunion with his former boss remains to be seen.

The report adds that the Magpies are still eyeing a move for 23-year-old Bournemouth winger Jordon Ibe. Another rumours section, another Ismaila Sarr to ​Watford update. What a life.

The Express, rerouted through the ​Daily Star, have another 'update' for us this time, and it really doesn't tell us much at all. Watford, the main contender for the winger's signature, are still locked in talks with Rennes, who remain determined not to sell for anything short of their £35m asking price.

They note that ​Crystal Palace and ​Leicester have entered the picture but that it's the Hornets who remain clear favourites at present for the 21-year-old, and are desperate to get a deal done before Thursday's deadline.

Sevilla, Valencia, Newcastle, Everton & West Ham are all interested in Portuguese attacking midfielder Rony Lopes, who Monaco want to sell for between €25m to €30m, according to L'Équipe.

Monaco winger Rony Lopes may well have his pick of the litter this summer, as a report from France list ​Newcastle, ​Everton and ​West Ham among a host of interested parties in the two-cap Portugal international.

The 23-year-old endured a difficult season in 2018/19, with a combination of injuries and his team being terrible meaning he struggled to show what he can do on a consistent basis, but he nonetheless scored four goals and assisted two in 29 appearances.

It was a good enough showing to generate interest from Valencia and Sevilla, as well as the Premier League trio, according to L'Equipe, although it is unclear if there have been any official approaches as yet.

Connor Wickham, remember him? Yeah, the once very highly-rated target man is now 26, and started just one game for Crystal Palace last season.

He looks dead-certain to be on the way out, and according to journalist Alan Nixon, he could have his pick of Stoke, Reading and Bristol City in the foreseeable future.

It's worth noting this one could well drag a bit beyond the Premier League deadline next week, however, since it's unlikely Palace will be desperate to draft in a short-notice replacement for such a scarcely-used player.

His record certainly suggests he'll be a good signing for any of those three sides. He's scored 22 goals in 87 games at Championship level over the years, and just 18 in 114 in the Premier League. Brendan Rodgers is not a popular figure up at Celtic Park after leaving them for Leicester in the middle of a Treble chase back in February, and he might be about to become incrementally less popular, as reports say he wants to bring in Kristoffer Ajer as a replacement for Harry Maguire.

The towering 21-year-old was converted from a clumsy holding midfielder into one of the most composed centre-halves in Scotland throughout Rodgers' time at Parkhead, drawing comparisons north of the border to former Hoop Virgil van Dik with his aerial dominance and willingness to get on the ball.

​The Star say Rodgers recognises his ability and may spend £15m to reunite the Norwegian with Filip Benkovic, who shone alongside him during his loan spell in Glasgow. Real Betis midfielder Victor Camarasa was a rare bright spark in a poor season for Cardiff as they were relegated back to the Championship last campaign, but his prospects of a Premier League lifeline look to have doubled up, as Burnley have joined Crystal Palace in pursuit of the Spaniard.

The 25-year-old scored five goals and registered four assists in 33 appearances, and according to ​Sky Sports, Palace's previously monopolised interest is now under threat from the Clarets.

He would likely cost a fee north of £10m, given that he is contracted until 2022.