I guess ​it's just that time of year again, when rumours are rife and you don't really know what to believe anymore.

It can be confusing, it can be exciting and it can even be a little but of both. When the summer months roll around and we no longer get the luxury of televised, top-level matches every single day of the week, we instead have to get our fix of football through the rumour mill.

Sometimes the gossip is clearly wrong, but often there seems to be at least a shred of truth involved. Speaking of which, here's a collection of stories with varying levels of believability for you to sink your teeth into. ​Atletico Madrid have a knack for unearthing South American

According to ​Globo Esporte, the two clubs have reached an agreement over the 21-year-old's sale, but are now waiting on a tax issue to be resolved before the transfer can be finalised. Paranaense want Atleti to pay the non-resident income tax that the Spanish government has imposed upon Brazilian and Argentine teams, which would amount to

Delph Surplus to Requirements at the Etihad In case you missed it, Atletico youngster Rodri is all but a ​Manchester City player after the Sky Blues ​agreed a €70m fee 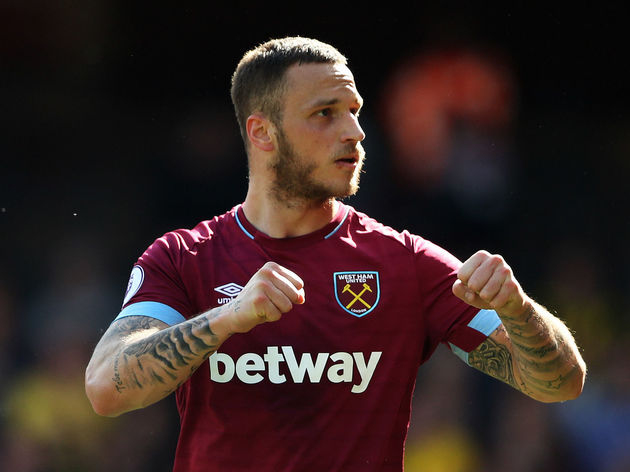 If you're interested in snapping up one of ​West Ham United's prized possessions, you've got one hell of a battle on your hands. The Irons are fierce negotiators and rarely bow to pressure, an approach they have once again taken following ​Inter's move for Marko Arnautovic.

The Nerazzurri are joined by fellow Italians Roma and Fiorentina in their pursuit of the Austrian hitman, but all three will likely end up empty-handed having been told by the Londoners that he is not for sale.

The ​Daily Mail report that West Ham intend to keep a hold of their top personnel for the 2019/20 campaign, though the news is hardly a hammer-blow for Inter as they continue to work on deals for Edin Dzeko and Romelu Lukaku. Kurt Zouma was a hit with the Goodison Park faithful during his season-long loan from ​Chelsea, so much so that ​Everton are hoping to bring him back on a permanent basis.

The ​Daily Star write that the gigantic Frenchman has already discussed a return to Merseyside with close friends, revealing that he would be thrilled were such a move to transpire.

However, the Blues may block a transfer elsewhere until they appoint a new head coach, as the incoming manager may want Zouma in his squad. If the rumours are true and it is Frank Lampard who takes over, the defender will probably stay at Stamford Bridge, having impressed the Chelsea legend when the pair were still teammates. The latest news filtering out of Turf Moor is that captain Tom Heaton is ​refusing to sign a new contract, alerting both ​Bournemouth and ​Aston Villa, who could capitalise on the goalkeeper's apparent desire to leave. The duo are not alone in the race for his signature, however.

​Watfordare also monitoring Heaton's situation and could make a £5m offer to ​Burnley in the coming days, or at least that's what the ​Sun say.

The Clarets may find they have no option but to sanction the sale, as Heaton - who would be in direct competition with Ben Foster for the number one jersey at Romelu Lukaku to Inter has been on the cards since before the latest ​Premier League season came to a close. So, it's definitely going to happen, isn't it? I wouldn't be so certain.

The ​Manchester United striker is not necessarily against a move to Milan, but would prefer to settle in Spain, where he believes his attributes are best suited.

​AS write that Lukaku's 'main desire' is to play in La Liga and a switch to ​Serie A is simply a fallback plan should no clubs from the former make an approach, which seems to be the case. The whole time that Dusan Tadic was at ​Southampton, we all believed that he was just a slick playmaker. Then we watched him leading the line for high-flying Ajax and realised he was also a superb finisher, a strong leader and a surprisingly-solid target for long balls.

It looks like we weren't the only ones paying attention. ​Mozzart Sport report that Chinese Super League team Dalian Yifang have made contact with the Serb, offering a three-year contract worth You may not have heard of ​Liverpool's 22-year-old midfielder Pedro Chirivella. If that is so, you won't be aware of his failed attempt to join Spanish second division side Extremadura in January.

Unperturbed by the collapse of that move, the Reds academy graduate is still pushing for a transfer to the ​El Periódico Extremadura), with t Lyon president Jean-Michel Aulas has already conceded that Ndombele will be allowed to leave the club once an acceptable offer is put on the table.