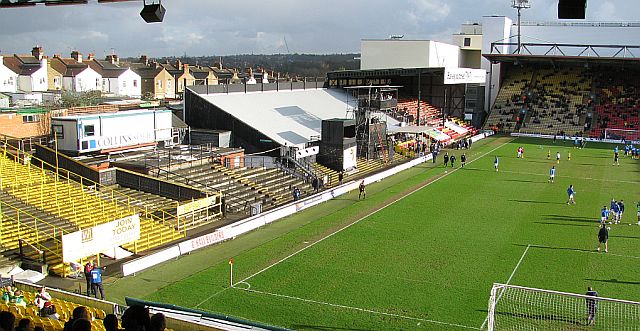 Southampton currently lead the table by one point from West Ham whilst Reading are a further four points behind and I'm sure the Berkshire club will be keeping a close eye on the goings on at Fratton Park.

If Portsmouth were unable to complete their fixtures and their record was expunged it would have a dramatic  effect at the top of the league. West Ham's four point lead over Reading would be gone and Reading would be left with a two point advantage and would take second place.

As it is, Pompey's ever decreasing squad is still playing and on Saturday they were beaten 3-1 at home by Middlesbrough. They have the same number of points now as they did after they'd beaten us in December having won 2 and drawn 4 since.

It was a lively encounter on Saturday when the Kettle (referee Trevor), who was down in Hampshire recently for our game at Southampton, really came to the boil. Both managers were condemning of Kettle's performance that saw him wave his red card at Rhys Williams, issue a total of ten yellow cards and award two penalties, both disputed by the managers.

The win takes Middlesbrough to fifth, behind Blackpool, who drew with Hull on Friday, on goal difference. The defeat leaves Pompey next to bottom in the table and with their playing squad reducing regularly, but a potential relegation is not their biggest battle.

The bottom three remains the same. Doncaster got a point but Coventry lost. Bristol City are just above them and they are the side in the worst form of all right now with just one point from the last seven games.

This week sees a full midweek fixture list, well almost. Our game at home to Birmingham has been called off because of their FA Cup replay against the Premier League's crisis club Chelsea, so we'll have to wait another four weeks for the return to Turf Moor of our Wembley captain and goalscorer.

The weekend results are below along with the stats, the league's leading goalscorers which sees Southampton's Rickie Lambert having reached 20 goals, each club's disciplinary record, the highest and lowest attendances and the next fixtures.