Toffees to Come Under The Clarets Hammer 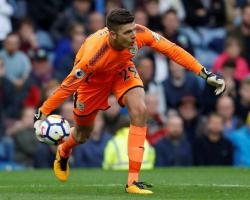 In a football match that promises to include more sub plots than a John Le Carre novel, Burnley entertain Everton at Turf Moor tomorrow in an English Premier League televised game with an early Saturday kick off at 12.30pm (GMT).

Just before this seasonÃâs English Premier League campaign even kicked off, the neutral observer was inclined to believe that Ronald KoemanÃâs big money summer outlay may well have seen the Blues draw parity with the Reds from across Stanley Park.

The fact that the richly experienced and acknowledged problem solver Sam Allardyce, had to be brought in to fix real relegation concerns shows how badly the fatally flawed scheme to buy the ToffeesÃâ way into the Premier LeagueÃâs top six failed.

ÃÂ Sean DycheÃâs Clarets are looking tomorrow to bring an end to a winless streak that is jeopardising their aims of a high EPL finish. ÃÂ Despite EvertonÃâs mediocre season so far, a few wins on the bounce could well see the Blues challenging for a place in the Europa League.

ArsenalÃâs rapid loss of confidence and lack of form means that a top six finish is not beyond the means of Burnley, Everton or Leicester City

That is sure to provide this game with an extra dash of spice.

I expect nothing less than warm embrace for the lad from Sean Dyche and some genuine applause from the Burnley fans who fully understood KeaneÃâs reasoning for a new adventure.

Keane arrived at Burnley four years ago, still a wet behind the ears wannabe from Sir Alex FergusonÃâs school of hard knocks

He now seems to be settling in to the Goodison Park culture after a difficult start to his Toffees career.

BurnleyÃâs Ben Mee and Jack Cork are also looking to be in the shop window and on current form cannot be far away from the full England team.

It is beyond ironic that Nick Pope may get the England nod ahead of Tom Heaton, the man he replaced in the ClaretsÃâ goal following the Burnley skipperÃâs pre-Christmas nasty shoulder injury

The present season will no doubt have many more twists and turns and it is not inconceivable that Burnley could be providing England with two goalkeepers for the flight to Russia and the World Cup Finals.

Speaking of the World Cup, BurnleyÃâs Ashley Barnes is also looking to impress and has given notice he wants to join the Austrian World Cup squad

Barnes already has one cap for the Austrians at under-20 level and given his current form, a call-up is not beyond the realms of possibility.

A debilitating injury list is clearing and the Burnley gaffer looks certain to be able to call upon the services of Chris Wood, Dean Marney, James Tarkowski, Nakhi Wells and Spurs loanee GK Nkoudou, who impressed with a couple of goals in a behind closed doors friendly on Monday.

Second guessing Sean Dyche on team selection and tactics is a really difficult way to pass time but I expect the team to line up in a 4-4-1-1 formation: Pope, Lowton, Mee, Tarkowski, Ward, Lennon, Cork, Westwood, Gudmundsson, Hendrick and Barnes.

It should be a real old fashioned game of football tomorrow and given BurnleyÃâs determination to return to winning ways and EvertonÃâs poor recent away record on the road, a home win looks to be the banker bet (TEC).