Thomas is better than Sodje 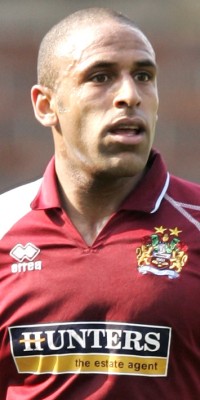 The link comes from the Football Conference Premier club Tamworth. They were in need of a new central defender over the summer and turned their attentions to Sodje who has left Bury.

But when those plans fell through they moved quickly to secure the services of Thomas, who was once a £1.2 million defender (if only in the eyes of then Southampton manager George Burley).

Manager Dale Belford clinched the signing of Thomas on Friday just hours ahead of their kick off at Salisbury the day after.

Thomas went straight into the team and was almost a scorer on two minutes, lifting a header over the bar following a ball into the box from another former Burnley defender Duane Courtney.

But he wasn't to be denied and headed Tamworth into the lead on 32 minutes.

It proved to be the only goal of the game and winning manager Belford, whose son is the goalkeeper and dad the kit manager, said: "Wayne was terrific for us. We have been after his signature for a long while, since a move for Efe Sodje fell through.

"We kept our interest under the radar and, besides, he was keen to try and remain in the Football League. He had a spell at Chesterfield through pre-season but, when that didn't work out, we managed to get him in.

"We are delighted to have him on board to be honest. He brings a wealth of experience and still has the hunger and desire for the game as well."