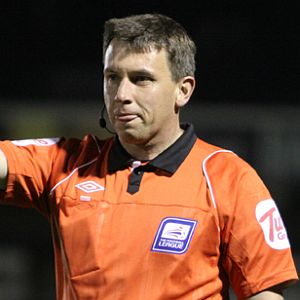 Those two Burnley games, against Barnsley and Bristol City, came over five years apart and there was a very good reason for that.

Sutton was promoted to the Football League list for the 2005/06 season but was axed after just two years with his performances not reaching the required standards. That Barnsley game, a 4-2 win at Turf Moor, came during the second of those seasons when he had a disappointing game.

Two years in non-league football followed but in 2010 he was re-appointed and again, in his second season, got a Burnley game, this time it was our 3-1 defeat against Bristol City at Ashton Gate at the beginning of November last year.

He must have had a good enough game because it won him 87 out of 100 in RATE THE REF, and currently sees him right at the top of that table. Anything much less than that score tomorrow will see him fall a few places.

Tomorrow will be his 14th game of the 2012/13 season and his fifth in the Championship. In the 13 games so far there have been 39 yellow cards and just one red card. Of those yellows, 17 have gone to home team players and 22 to away team players.

The solitary red card came in the week ahead of the start of the league season in the Capital One Cup tie between Rochdale and Barnsley at Spotland. Barnsley won it 4-3 after extra time despite having goalkeeper Ben Alnwick sent off just before the end of normal time.

His last game was Peterborough's 2-1 home defeat against Crystal Palace two weeks ago. There were three yellow cards in that game, George Boyd and Nathaniel Knight-Percival of Peterborough and Palace's Glenn Murray.