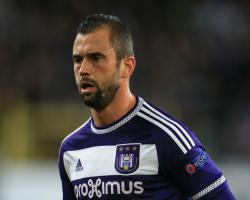 The Clarets signed 28-year-old Defour from Anderlecht this week for a fee thought to be in the region of ÃÂ£7.5million, an upgrade on the ÃÂ£6million they parted with to bring Andre Gray to Turf Moor last summer in their previous record deal.

Amid the millions circulating in the top flight, which Burnley have rejoined this season, such sums can now be seen as trivial, with Manchester United using ÃÂ£89million to land Paul Pogba and the Clarets' opponents this weekend Liverpool signing Sadio Mane for ÃÂ£30million this summer.

Dyche and Burnley are shopping in a different market, though, and the boss who sold Charlie Austin near the start of his reign to keep the club's books balanced, believes Defour's transfer is a real coup.

"We all worked hard to get the deal done eventually," Dyche said at a press conference on Thursday.

"In the Premier League world, the numbers that get bandied around for us seems really small

But for us, they are actually big for a club like Burnley

The rest of the Premier League are probably going, 'Why aren't they are just getting on with those deals?'

"For us, it's a big thing to spend millions of pounds

For others, it's just like, 'Park that, let's move on and get another one in'

That's the vast difference in the market

"Liverpool, for example, their cheapest player will be more expensive than our record signing

"We know there are no guarantees

But, as one of the big reports Deloitte puts out says, generally speaking, clubs end up about where their finance guides them to

"That's often why finance is spoken about a lot and we are at the bottom of the pack so we have to fight beyond that and come out with something that will work."

Defour, a 46-cap Belgium international who has played in the Champions League with Anderlecht, Porto and Standard Liege, could make his debut when Liverpool visit Turf Moor on Saturday.

Once courted by Manchester United when Sir Alex Ferguson was in charge, Dyche insists Defour is now prepared for a battle against the drop which Burnley will look to avoid for the first time in the Premier League.

"He knows it will be a challenge for us," Dyche added

"He's got a depth of experience

"He knows it will be a challenge and he wants to be part of that."