​Burnley have continued their fine run of form thanks to a 2-1 win away at Southampton, with

The Clarets took a bizarre lead inside the opening two minutes when Ashley Westwood's corner went all the way into the goal, with Danny Ings leaving his goalkeeper short-changed after failing to clear the ball at the near post.

But Ings didn't take long to make up for his mistake at the start of the match and he picked out the bottom corner of Nick Pope's goal with a powerful strike from the edge of the penalty area, deservedly bringing Southampton back on level terms. Jack Stephens came close to completing the turnaround only to be denied by the crossbar and both sides went into half time on level terms, but

Cast your mind back to their 9-0 defeat to ​Leicester City and it's difficult to imagine how ​Southampton are in the position they are now.

They haven't just been able to become much more accomplished with their overall pressing, but it's their use of wingers which is highlighting how much influence 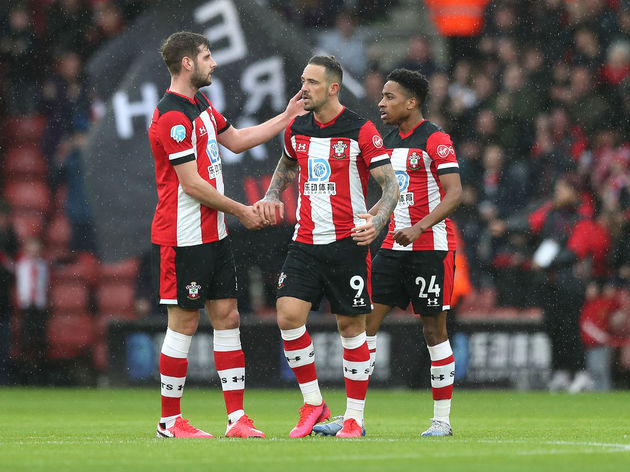 It was the worst possible start for ​Ings when his decision to duck out the way of Ashely Westwood's corner just 95 seconds into the match, but Southampton's star man didn't let it get to him, if anything being spurred on by the early mistake.

Danny Ings is the most underrated striker in the world! He is world class and should be a lock in the English squad for the euros! #SOUBUR

Danny Ings should be at the Euros 100%

Danny Ings with another goal man smh.. if he was Brazilian and called Dani Inginho Real Madrid would be all over him.

Ings pulled Southampton back on level terms with a brilliant strike from the edge of the penalty area and he continued to be a threat in front of goal throughout the game, but ultimately the hosts just didn't quite have enough to break ​Burnley down.

Sean Dyche set up his side to match Southampton's formation in the hopes it would help to negate their host's threat going forward, but Burnley's defenders, initially at least, couldn't deal with the pace and movement that was coming their way. The pre-match game plan seemed to go out the window after they took the lead just 95 seconds into the match and things were made worse for Burnley after they conceded the equaliser, with Chris Wood being forced off the pitch through injury.

Even with nothing seeming to work for Burnley going forward, some individual brilliance from

It wasn't an impressive afternoon for Burnley as a unit, but centre-back James Tarkowski showed why he's still the most important player at the club when it comes to their continued survival in the Premier League.

James Tarkowski has been everywhere so far defensively. Quick into challenges, reading the game well. #twitterclarets

The 27-year-old was tasked with more work than any other player on the pitch due to Phil Bardsley's awful positioning, but Tarkowski didn't give Ings or Shane Long any time on the ball on his side of the pitch.

Southampton will stay at home next weekend against relegation strugglers Aston Villa, with their next trip away coming against West Ham.