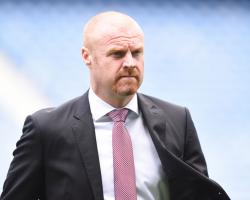 The Clarets this week brought in Belgium international Steven Defour for a fee understood to be in the region of ÃÂ£7.5million, in a deal which boss Dyche hailed as significant for the Premier League newcomers.

Defour's arrival was offset by David Jones' departure to Sheffield Wednesday, leaving Burnley still short in the central-midfield area, and Dyche has stressed he may have to splash more cash prior to September.

"The market is that crazy we might have to do more than (the Defour fee)," he said at a press conference on Thursday.

"If the right player comes along who we've been targeting we might have to.

"A year ago Andre Gray was ÃÂ£6million but that now seems really cheap, but when I took him there was a lot of raised eyebrows in that he'd only had one year in the Championship and would he do it again? Now it looks cheap as chips, and that's in one year."

The hope is that landing Defour, a 46-cap international who has played in the Champions League and World Cup, will help attract others to Turf Moor.

The 28-year-old's signing represents a coup given the player was once coveted by Manchester United and Dyche revealed the midfielder had done his background on Burnley before opting for the switch from Anderlecht.

"I just spoke to him about the club, what we are and what we want to do, he's done his fair share of homework," Dyche added.

"He knows some Belgian players over here, he'd spoken to them, they'd all said it was a good place, and he felt he could be a part of it.

"At his age he's football savvy enough to know where we are in the Premier League, what we've come from and what we're hoping to do.

The Premier League is a big draw to a lot of players and you may only get one chance to be in it."

Defour could make his debut against Liverpool on Saturday and Dyche will not even have to worry about how he accommodates him given Jones will have to come out of the line-up having joined Wednesday.

The 31-year-old was out of contract at the end of the campaign, yet his departure was still a surprise given he has been a mainstay under Dyche for three years.

"He had a clause in his contract he could activate and he did," Dyche explained

He's a man, not a boy and he knows what he wants out of life for him and his family

I can't say enough good things about him

He's been exceptional for us

"His contract was running down this year

We would have offered him something, not as long as three years, but that's a life decision for footballers."