Referee Russell will end our season 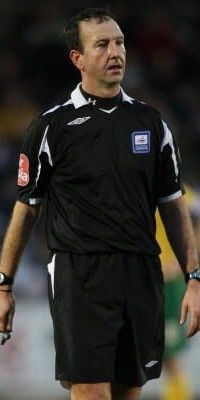 He's not been a regular referee for the Clarets. Despite becoming a Football Referee ahead of the 2004/05 season this will be just the third time he's refereed us and the first time at Turf Moor for over five years.

He started his Football League career by refereeing Scunthorpe's home game in League Two in August 2004 and in January of that season was allocated his first Championship game, that between Ipswich and Coventry at Portman Road.

In neither of his Burnley games have there been any real problems but he had effected one Burnley game this season, our New Year's Day fixture at Sheffield Wednesday.

Two days earlier he'd refereed Wednesday's game at Huddersfield during which he got things horribly wrong by yellow carding Wednesday's Jeremy Helan twice without sending him off.

That enabled Helan to play against Burnley when otherwise he would have been suspended. The FA finally sorted it out and suspended him for an FA Cup tie for which he wasn't even eligible to play.

His season has seen him referee 46 games, 16 of them in the Championship. There have been 99 yellow cards in those games along with four red cards. A total of 41 of those yellow cards have gone to home team players with 58 to away team players.

I was surprised to see Russell allocated to this game tomorrow lunchtime given that he was refereeing last night in the League Two play-offs. He refereed the Northampton v Cheltenham game in which there were four yellow cards; they went to Chris Hackett and Ishmel Demontagnac (Northampton) and Steve Elliott and Jermaine McGlashan (Cheltenham).

The assistant referees for the final game of the season are Gary Evetts (Hertfordshire) and Geoff Law (Leicestershire) and the fourth official is Football League referee David Webb (County Durham) who refereed our league games this season at Huddersfield and Sheffield Wednesday.