Probert to referee Burnley for first time in two years 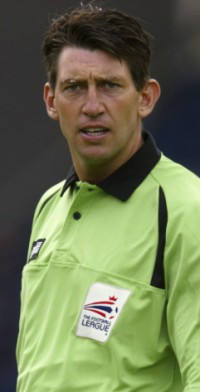 That Manchester United game was his only Burnley game in our Premier League season and he hasn't refereed us since.

The first time he refereed us was at Plymouth back in the 2004/05 season. He had something of a nightmare that afternoon and things weren't much better in his next few games either.

He'd been earmarked for the Premier League and eventually got there in January 2007 when he refereed the game between Sheffield United and Portsmouth at Bramall Lane.

Probert has certainly improved since his early days and is now used almost exclusively in the Premier League and this will be only his second Football League game this season. We might need to beware too, in the other between Brighton and Leeds at the Amex he yellow carded no fewer than ten players.

This season he has refereed two Europa League games and one international between Azerbaijan and Belgium. There have been 16 yellow cards and two red cards in those games, but in 18 domestic games he's handed out 54 yellows and just one red card.

Of those yellow cards, 26 have gone to home team players and 28 to away team players. The only player he's sent off this season is Arsenal's Djorou in their recent 2-1 defeat at Fulham.