Pompey and Donny on the brink 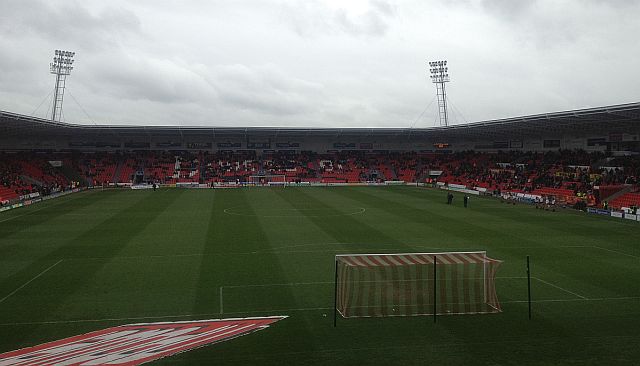 Our win at Doncaster on Monday, which incidentally was our first win there since 1991 and our first ever at the Keepmoat, was followed by Portsmouth losing 1-0 at home last night against Millwall, and that must surely now end any realistic hopes either had of staying up.

These two clubs have tried to do things differently. Doncaster have wheeled players in and out like no one's business this season. When the daft idea first came to light I suggested it would all end in tears.

I'm not so sure whether there have been any tears but they have to win all their remaining four games to even have a mathematical chance of staying up and they can now start preparing for League One football.

They can also get used to there being no players such as El Hadji Diouf, Habib Beye, Pascal Chimbonda and Frederic Piqiuonne around in future, not as though they've done them much good.

Portsmouth tried a totally different idea. Their idea was not to bring players in on short term deals but to bring them in on long term deals at wages they couldn't afford to pay. They've tried this before and it got them into the Championship (from the Premier League), this time it is taking them out of the Championship.

Well it has Portsmouth, and only a miracle of biblical proportions will keep you away from League One next season where your chimes will be heard around some of the smaller clubs such as Stevenage, Yeovil and Preston.

Maybe there have been tears at Fratton Park too, but I don't suspect there will be many people with an interest in football showing too much concern at the demise of either of these two clubs.

Who will go with them? It is looking like a straight fight between Bristol City and Coventry City now with the Bristol club the favourites to stay up after winning the game between the two of them 3-1. It's given them a four point cushion with four games to play.

West Ham only got a point with a late penalty too against Birmingham? Was it a spot kick? I bet Jon Moss wouldn't have given it at the other end.

Southampton won 2-0 at Palace and Reading last night won at Brighton, and that result pleased me no end given I'm still seething at the loathsome, cheating Sussex club after their performance at the Turf last Friday. Bad news for Brighton though, Gus Poyet hadn't gone missing and turned up for the game.

It's the big one on Friday - Southampton v Reading and I would think the winners of that game could just about book their Premier League place. Sorry Reading but I have a hunch you are going to do it, and just about all my predictions this season have been wrong ones. I'm looking forward to watching that one on television on Friday.

We're nicely settled in the top half again now after the six point Easter. Such has been our form over the weekend that it's just a pity we still don't play three games. Even so, we're now only nine points away from last season's total and that is some achievement given the turnover of players.

We've four left, two at home against the relegation battlers with away games between the two at Leicester and Blackpool who are both still chasing the promotion dream. We'll never hear the last of it from Holloway if the Lashers do it again.

Finally, I'd like to pass on my hearty congratulations once again to referee Darren Deadman. The poor man only managed eleven yellow cards over the Easter weekend, but it was enough to take his yellow card total past the 200. His 201 is 75 yellow cards more than any other referee, and that really is some achievement. I just wish they'd let him loose in the Premier League. Ferguson would have him for breakfast.

The results from the latest Easter games are below with the stats, the league's leading goalscorers, the red and yellow card counts for each club, the highest and lowest attendances and the next fixtures.