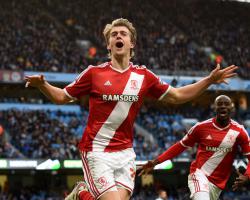 The 22-year-old, who has been unable to force himself into the first-team picture at Stamford Bridge, has had previous spells at MK Dons, Derby, Middlesbrough, Crystal Palace and Norwich.

Bamford arrives at Turf Moor after the club signed Steven Defour from Anderlecht for a fee in the region of ÃÂ£7.5million a fortnight ago and deals for Jamie Thomas, Robbie Leitch, Nick Pope and Johann Berg Gudmundsson earlier in the summer.

Bamford, a graduate of the Nottingham Forest Academy, caught the eye in the 2014-15 season when he scored 17 times in the Championship for Boro.

He also scored in a memorable FA Cup win at Manchester City that season but missed out on a European Championship spot with England Under-21s through injury.

He played in the Premier League with both Palace and Norwich last season but neither spell proved fruitful.