New deals for Yates and Howarth 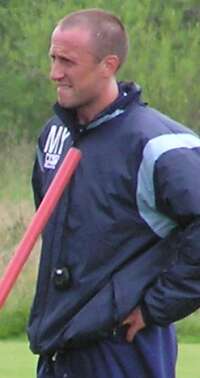 Yates was Frank Casper's last signing for Burnley in 1991 and was with the club for two years withotu ever establishing himself in the first team, but he returned to Turf Moor in the summer of 2004 as part of new manager Steve Cotterill's back room team.

He was first team coach and also took charge of the reserves. Not only that he played for the reserves too and due to the lack of numbers was also included as a substitute for the first team on a few occasions.

He left us in January 2006 to try his hand at management with Kidderminster Harriers where he teamed up with Neil Howarth, another former Claret, who became his assistant.

Cheltenham, another former club for both of them, came calling in December 2009 as they sat 22nd in League Two with a return to non-league football very much on the cards. They just about survived that season, remaining 22nd, moved up to 17th last season and have now given themselves a chance of promotion.

That's led to both him and Howarth getting new deals until the end of the 2013/14 season and Yates said: "It has been on the backburner a little because we wanted to concentrate on the football but we've achieved what we set out to achieve and I think now was the right time to get it done. Both Neil and I are delighted to have signed a new deal which will see us here for another two years."

Cheltenham are now looking forward to a play off semi-final against Torquay United.