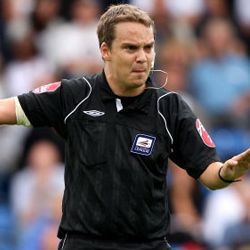 Tonight, the man in charge is Michael Naylor from South Yorkshire. It's just his second season as a Football League referee and tonight's game will be only his fifth at this level this season and his seventh in total.

Our paths have crossed before. He refereed his second Championship game at Turf Moor last March against Coventry. The game was drawn 2-2 and there were also two yellow cards each. He did OK and his performance gave him a rating of just over 60 in RATE THE REF which sees him in 37th place in the table.

This season he's refereed 20 games in total and there have been 74 yellow cards and four red cards in those games.

He's certainly had his moments and in the League One clash between Notts County and Tranmere back in August there were a grand total of 11 yellow cards in a game that also saw Tranmere have two players sent off.

Last time out he had a quiet game. It was Hereford's 2-0 home defeat against Shrewsbury on Saturday and there were no cards.