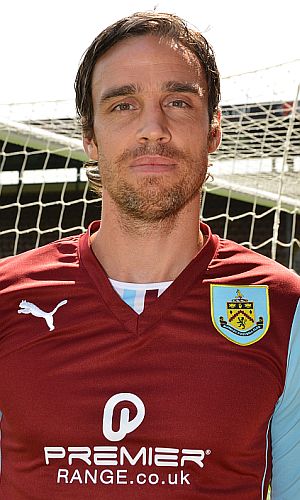 He made it, just, but by then he was very much the first choice central defender again under Sean Dyche's management, playing alongside Jason Shackell, so much so that during last season, having missed the first four games through injury he was missing only for one more game after being sent off at Huddersfield.

Duff has been the connection between the team promoted in 2009 and the current promotion team, the only player to have been at the club for both. It became inevitable that he would be offered a new deal and he's signed that deal today, meaning an 11th season at Burnley for the calculated risk who cost us £30,000 from Cheltenham in the summer of 2004.

He's gone on to make 336 appearances for the Clarets including 297 in league games, so will be looking early into next season to add his name to those who have gone past 300 league appearances.

Built up by the club this afternoon as being another signing to follow on from the capture of Matt Gilks, there was certainly no disappointment amongst those on Clarets Mad at the news that it was a new deal for Duff.

The calculated risk was Steve Cotterill's second signing as Burnley manager, following on from John McGreal. Michael Duff is no longer a risk at all.