Mixed news for two of our Wembley heroes 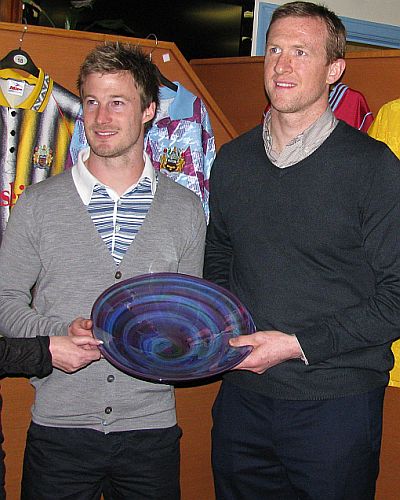 It's always sad to see players move on when they have given so much to the club and I was particularly disappointed when Steven Caldwell was released in the summer of 2010 and Wade Elliott was sold just over a year later.

Caldwell spent a year with Wigan but for the last two seasons, since Elliott's deadline day move in August 2011, they've been team mates at St. Andrew's with Birmingham.

Elliott was the one of the two with the uncertain future but today has come news that Caldwell will be the one definitely moving on. He was a regular in the Birmingham team; he's played in all the games against us in the past two seasons.

In early March he had a shocker in a 5-2 defeat against Hull at the KC Stadium, a ground where he was sent off playing for Burnley in 2008, and since has made just one substitute appearance.

Caldwell has one year remaining on his contract but Birmingham have confirmed today that he will spend that year on loan with Major League Soccer club Toronto.

Elliott, out of contract, has been rewarded for his performances this season with a new one year contract with a one year option. Now aged 34, he's made 46 appearances for the Blues this season and is expected to sign the new deal on offer.

I still can't help thinking though that I'd like to see him playing in a claret and blue shirt again. By the time he left there is no doubt that opinion was divided but of all the players who departed during that summer 2011 window I think he's the one we missed most.

Away from Birmingham has come news that striker Alan Lee is one of three players released by Huddersfield. He's been with Huddersfield for three seasons and a year ago was part of the team that won promotion with a penalty shoot out play-off win against Sheffield United at Wembley.

It's a long time since Lee was at Burnley. Signed from Aston Villa in the summer of 1999 he moved to Rotherham in November 2000 after a successful loan. He subsequently played for Cardiff, Ipswich, Crystal Palace and Norwich before arriving at Huddersfield.