​Former England number one Joe Hart is in talks with Minnesota United over a move to the MLS club.

The Burnley man is currently second fiddle to fellow Englishman Nick Pope at the Clarets and is wanting out – with MLS being a viable option.

The Athletic's Jeff Rueter confirmed this week that the Midwestern side hold Hart's 'discovery rights', a process which essentially gives them the right of refusal to sign the Englishman ahead of any other team in the league. This all comes as part of a goalkeeping problem at the MLS club. Former Arsenal keeper Vito Mannone is their number one choice after impressing during a loan stay from Reading, but has rejected a contract offer.

​Hart has also been linked with David Beckham's Inter Miami, but Minnesota's hold of his discovery rights means that the new expansion team would have to negotiate a deal to acquire his rights before he was able to sign a contract.

I can confirm that #MNUFC holds Joe Hart’s discovery rights, per multiple league sources. The Loons are still in the market for their starting goalkeeper, as Vito Mannone’s loan from Reading has expired.

The 32-year-old has only appeared twice for the Clarets this season, in an FA Cup win over Peterborough and a Carabao Cup loss to Sunderland.

He spent 12 years at Manchester City, winning the Premier League twice before falling out of favour under Pep Guardiola, which resulted in two loan spells away from the Etihad before a permanent move to Turf Moor in 2018.

However, with Mannone looking as if he will reject any sort of permanent contract that Minnesota will offer, Hart could be on the move again. Talks with Mannone are reportedly ongoing but it is looking less likely that the ​MLS Goalkeeper of 2019 will sign on. 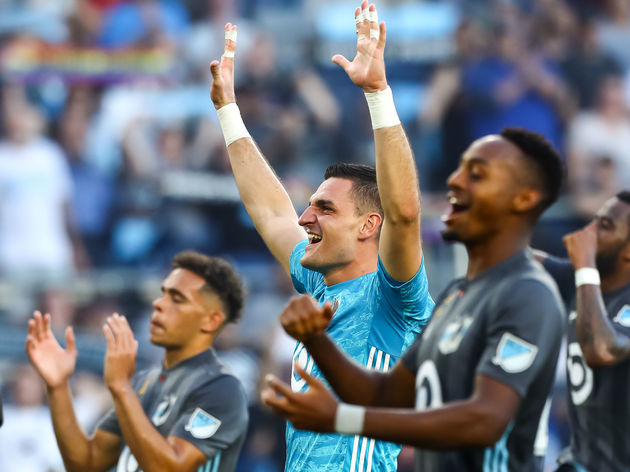 This means Hart would become the number one option for the MLS team, with the stopper getting no game time at ​Burnley and Minnesota needing to bring in a keeper before the MLS season starts again at the end of February.