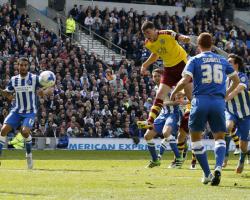 However Keane powered home Matthew Taylor's corner, moments after he was denied an equaliser despite replays showing the ball had crossed the line, to earn a share of the spoils.

The Clarets are now three points above Middlesbrough, who won 3-2 at QPR on Friday, while Brighton remain third.

Hull are hot on Albion's heels in fourth place after a comfortable 4-0 win over Bristol City reduced the gap to just three points.

Curtis Davies, Robert Snodgrass, Mohamed Diame and Sone Aluko got the goals as the Tigers picked up their first win in six league games.

Stuart O'Keefe's second-half strike helped Cardiff to narrow the deficit on fellow play-off hopefuls Derby to just two points after a 2-1 win over the Rams in South Wales.

Bruno Ecuele Manga headed the Bluebirds in front before Chris Martin equalised shortly after the break but O'Keefe sealed the win for seventh-placed Cardiff on 68 minutes.

Derby slipped down to sixth after Fernando Forestieri's late winner saw Sheffield Wednesday leapfrog them with a 1-0 win at Huddersfield.

At the other end of the table, Moussa Dembele's decisive strike helped Fulham to a vital 2-1 victory over fellow strugglers MK Dons at Craven Cottage.

Ross McCormack's 20th league goal of the season was equalised by Josh Murphy on 63 minutes but Dembele struck to move the Cottagers four points clear of their 22nd-placed visitors.

Lee Frecklington broke the deadlock for the Millers just before the half-hour mark but Matt Derbyshire was sent off for a clash with Gaetano Berardi on 61 minutes.

Luke Murphy equalised before Marco Silvestri was then dismissed for the visitors on 89 minutes and Halford converted the subsequent spot-kick past makeshift keeper Giuseppe Bellusci to move Rotherham five points clear of MK Dons and the relegation zone.

Charlton are now just two points behind the Dons after their own late goal, courtesy of Jorge Teixeira, sealed a 2-1 win over Birmingham.

Jon Toral put Blues in front on 32 minutes but Johann Berg Gudmundsson's goal before the break gave the Addicks hope and Teixeira completed the comeback in added time.

Bolton, who had Rob Holding sent off in the first half, remain rooted to the foot of the table and are now 15 points adrift of safety after Ola John netted a last-minute winner for Reading.

Holding was dismissed on 22 minutes for a foul on Matej Vydra but the on-loan Watford striker saw the resulting penalty saved by Trotters keeper Ben Amos.

Shane Duffy was sent off as Blackburn relinquished a lead and fell to 2-1 defeat to Lancashire rivals Preston.

The Rovers defender saw red after saving Joe Garner's shot on the line with his side already ahead through Elliott Ward's first goal for the club.

It led to the former Rovers striker Garner slotting home the resulting penalty and his strike partner Jordan Hugill scored the winner in the 43rd minute.

Elsewhere, goals from Lasse Vibe, Nico Yennaris and Sergi Canos ended Brentford's four-game losing streak with a 3-0 victory at Nottingham Forest, who had Eric Lichaj dismissed late on, while Wolves and Ipswich played out a 0-0 draw at Molineux.