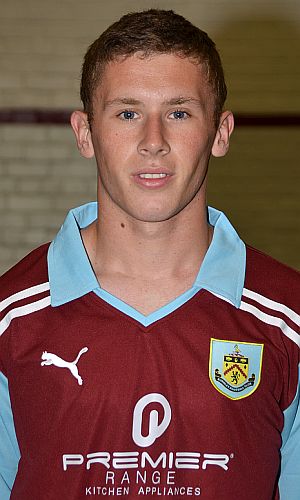 He got his first under-21 call at the end of last season and now there is further recognition with this call up which will prove to be a reminder for those who saw him play in the tournament in 2009 when the Clarets were there courtesy of Clarets Mad.

The NI Milk Cup is held at the end of July with Northern Ireland facing Chile and Mexico at Ballymena and Coleraine respectively on 21st and 23rd July.

Shay ended his scholarship at Burnley last season and came to prominence when he scored the late winner in the FA Youth Cup at West Brom and followed that up by netting the third in the quarter-final at Fulham.

His achievements were highlighted when he visited the current County Down Milk Cup squads at the parents information evening. Shay had been voted their player of the tournament in 2009.

He was welcomed by the County Down Milk Cup PRO Barry Greene who said: "There’s no better example of how the Milk Cup can propel the career of a talented young individual.  Shay was outstanding for us in the Under-15 section back in 2009.

“Less than three years later he is in the first team squad at Burnley.  I’m sure Shay’s success will inspire individuals within this year’s group of players to go on and do something similar.”

With the release of the retained list, Burnley confirmed that he had been offered a professional deal but there has been no indication from the club whether he has signed it or intends to sign in. The good news is that Shay himself said today that he has signed and will be back at Turf Moor next season.