Martin to referee us for first time 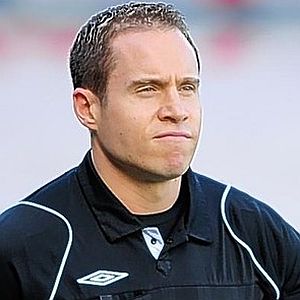 Two seasons ago he was refereeing in the Blue Square Premier League but he was promoted to the Football League for the 2012/13 season and promptly sent off a player in his first game of the season.

Gillingham's Tom Flanagan was the player who saw red, twelve minutes from the end of their 1-0 away win against Wycombe. He was sent off for a second yellow card in a game that saw only one other yellow card.

It was his only red card of the season and he didn't hand out too many yellows either; just 54 in 27 games, exactly two per game.

The first player he yellow carded this season was Oscar Gobern in the 67th minute of Huddersfield's 0-0 draw at Blackburn. He also carded Lee Williamson of Blackburn later in the game. Incredibly this was Martin's seventh game of the season; there had not been a single card in the first six games.

He's refereed 22 games now this season and there have been just 35 yellow cards, 16 of them to home team players and 19 to away team players. And on Boxing Day he doubles his red card total in the Football League with Jesse Lingard sent off in Birmingham's 0-0 draw at Wigan.

Tomorrow will be the first time I've seen him referee. He refereed only one Championship game last season but tomorrow will be his sixth this season.

In his last game there were two yellow cards as Mansfield won 2-1 at Cheltenham in League Two on Sunday 29th December. The two players carded were both Mansfield players, James Jennings and Anthony Howell.