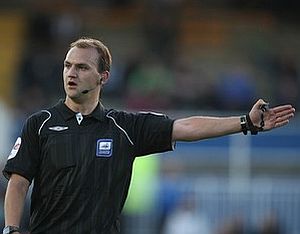 A defeat it may well have been but there were no complaints about Madley's performance that night. In fairness it was not a difficult game to referee but he impressed with his willingness to allow the players to get on with playing and his readiness to always look for the opportunity to play an advantage.

Madley, the youngest ever Premier League assistant referee, is one of two brothers in the Football League and his brother Andy will also be refereeing in the Championship tomorrow at Hull.

Bobby is thought to be a young referee on the way up, but he's certainly not doing it by waving his cards around and this season there have been just 43 yellow cards and a couple of red cards in a total of 22 games.

Of those yellow cards, 21 have gone to home team players and 22 to away team players whilst the two players sent off were Tranmere's Jose Baxter in a 4-2 defeat at Scunthorpe and Conor Hourihane of Plymouth in a 3-2 loss at Crewe.

His last game came last Saturday in the FA Cup and Everton's 2-0 home win against Tamworth. The only player carded in that game was Tamworth goalkeeper Joe Collister.