Jutkiewicz signs in with the Clarets 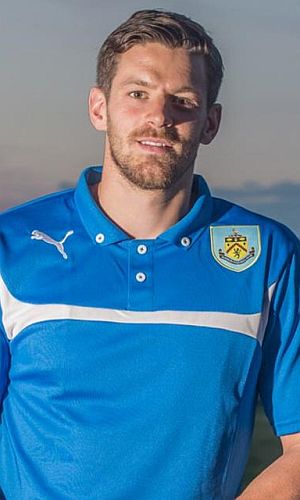 Jutkiewicz joins the Clarets after over two years on Teesside where he has failed to win over the 'Boro fans and had played his best football during that time when on loan at Bolton last season.

Two years later he played for them in a 3-1 win against us in the FA Youth Cup at the County Ground just 24 hours after making a first team appearance. Rob Turner gave us the lead but Jutkiewicz got two assists as Swindon won 3-1.

He made his first team debut for Swindon in April 2006 as a 17-year-old. That was  as a substitute but six days later he got his first start at Scunthorpe. He made just 38 league appearances for Swindon, scoring 5 goals, but his form persuaded David Moyes to take him to Everton. In three years there he made just one substitute appearance in the Premier League, replacing Tim Cahill as a late substitute in a 3-0 win against Sunderland.

He had loans with Plymouth, Huddersfield and Motherwell during that time and in January 2008 played against Burnley for the first time at first team level when he lined up for Plymouth in what proved to be Owen Coyle's first home win in charge of the Clarets.

Things took an upward turn for him when he signed for Coventry in July 2010 and he scored 18 goals for them in 67 appearances, and that included one at Burnley in a 2-2 draw in March 2011.

Such was his form that Tony Mowbray splashed out around £1.3 million to take him to Middlesbrough in January 2012 and he made his debut for them against Burnley, a 2-0 win for the Clarets with goals from Jay Rodriguez and Kieran Trippier.

He'd just signed and had been named as a substitute, coming on just after half time to replace Richard Smallwood.

Jutkiewicz has not been popular with the fans there but a loan at Bolton last season saw him hit form again. He started 16 games for the Championship club, with four more appearances from the bench, and netted seven times.

Bolton fans were very keen to see him go back as was manager Dougie Freedman. It was thought the sale of Marvin Sordell would help them fund the move, but Burnley have moved in again to take the striker on a three year contract for an undisclosed fee, leaving the club supposedly ten years ahead of us looking elsewhere for a new striker.

Sean Dyche said of his new signing: "I still think there is development in Lukas, he's 25 and has been around a little bit now and he finished last season very strongly.

"I feel there is even more to come and he'll be hungry for that. He'll be working with a good group who are all hungry to not only achieve things but to keep pushing themselves as individuals. That's a big part of our mentality and he'll fit into that very nicely.

"He's a physical presence who can hold the ball up very well and link play. We think there are goals in him and it is very similar to the Sam Vokes story where he's always done well and we're looking for him to build on what he's done.

"There isa nice demand now in that area of the pitch as all the players offer something different to the team so we're happy with how that is developing."