Jutkiewicz on the road back

Lukas Jutkiewicz is on the mend.

Sean Dyche has announced there are no new injury concerns ahead of the Clarets' Turf Moor SKY Bet Championship match against Leeds United on Saturday. 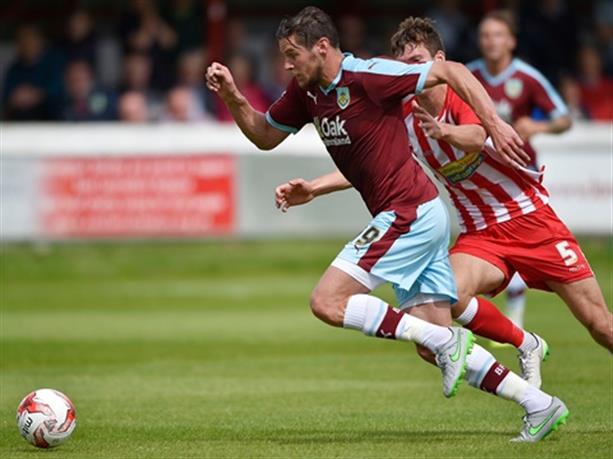 The Clarets are further boosted by the great news that Lukas Jutkiewicz will step up his recovery from a cruciate knee ligament injury. Lukas will feature in a Development Squad game against Liverpool at Melwood tomorrow.

The 27-year-old Jutkiewicz has been out of action since suffering the injury in a 2-1 win over Bristol City in August. Sean Dyche is delighted to have another key striking asset on his way back from long-term injury, following Ashley Barnes’ recent return to the Clarets' first team squad.

Dyche confirmed the news, “It will be great to have him back, his injury was a strange one really. Usually all the muscles in the knee snap but it was literally just his cruciate ligament."

“He’s seen Sam Vokes, Ashley Barnes and Dean Marney come back and they’ve been able to give each other advice and hopefully the minutes tomorrow will help in that process."

“We don’t like putting timescales on it, so we’ll see how he reacts to tomorrow’s game.”

Alongside Jutkiewicz, fellow forward Chris Long is now back on grass with the physios after suffering with a hamstring injury.

Dyche added: “Chris is a bit of a longer term one its more severe than we thought, but I did say it would be weeks not days.

“As for the rest of the side, there’s a few bumps and bruises, aches and pains, but we’re in good shape for the weekend.”

It seems to be all coming together for the Clarets at exactly the right time! (TEC)