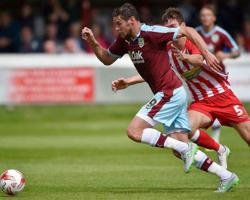 On loan Clarets' striker Lukas Jutkiewicz finds himself very much in demand by promotion chasing championship clubs Birmingham City and Derby County.Burnley forward Jutkiewicz presently on loan at Gary Bowett's Blues of Birmingham is now at the centre of a tug of war according to footie journo Alan Nixon.

Andrews.He has netted five goals in his last eleven appearances for Birmingham City, helping to fire the Blues into contention for a Championship play off place.It is reported that Burnley manager Sean Dyche allowed Jutkiewicz to seal a transfer day deadline loan deal to Birmingham City back in August and an agreement was made that would allow the Blues to make the deal a permanent one in the January transfer window if the loan worked out.Jutkiewicz is now fully recovered from a knee injury that kept him out of the Clarets' line up for almost a year, he is leading the Blues line brilliantly at present and scoring regularly.A fee believed to be in the region of ÃÂ£2 million pounds is not an issue for Derby County but the Blues have first shout on Jutkiewicz's services, following the hatching of the initial loan agreement between Sean Dyche and Gary Rowett.The Burnley gaffer however has a hard earned reputation for straight talking and straight dealing