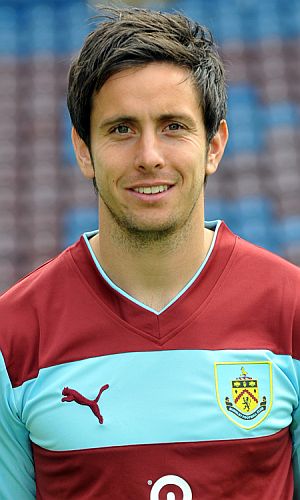 Stock, who hardly figured at the start of the season, has featured regularly since Eddie Howe left and he's made the most of it with some excellent performances. In particular at Ipswich he stood out in a first half that Burnley dominated.

He polled 20.6% of the man of the match vote to win it over Michael Duff who was second with a 14.0% share. Dean Marney took third place with 12.5% and defenders Jason Shackell and Danny Lafferty shared fourth place with 8.8% of the vote each.

The player ratings saw Stock come out as the only player with a rating over seven. He scored 7.22 out of 10 to take first place. Two defenders took the next two places. Shackell was second with 6.78 and a rating of 6.67 gave Lafferty third place.

Goalkeeper Lee Grant came in for some criticism for his part in Ipswich's first goal but his overall performance was still enough to give him fourth place with a rating of 6.44 out of 10.

The result gave Stock another ten points in the Clarets Mad Player of the Year Table. Shackell won four points, there were three points for both Duff and Lafferty, two for Marney and one point for Grant.

Stock has now moved into third place in the table. He's now just 15 points behind Grant who remains some distance behind leader Charlie Austin.

The next man of the match vote will be for the Charlton game and will be available for your votes within an hour of the final whistle on Saturday.

The result from the Ipswich game, and the current player of the year table, can be found below.