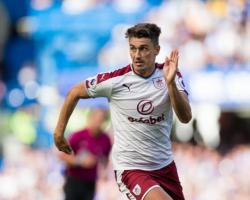 A third round draw away to Manchester City represents just about the toughest draw which any team could be offered, and due to the indiscriminate and random nature of the cup draw; it was Burnley who were obliged to fulfil this fixture

It should be stated from the outset that Burnley did little wrong throughout the course of the game, particularly during a first half in which they pressed and harried City sufficiently to induce a disjointed display from the hosts, culminating in a howler from John Stones which allowed Ashley Barnes the opportunity to put the Clarets ahead, a lead they would hold on to at the break

City were always going to respond vigorously to BurnleyÃâs impertinence and having no doubt spent the interval on the receiving end of a Guardiola ear-bashing, they re-started with stiffened resolve

They held on for a while, but eventually they were forced to yield

Depending on oneÃâs point of view, the equaliser was either a piece of enterprising quick thinking or dubious low cunning, when the match referee allowed the ball to be slipped through to Sergio Aguero, whilst Burnley were still constructing their defensive wall and waiting for the whistle

The second goal followed almost immediately, with no complaints this time

Is it too much to ask that City sell him before the teams meet at Turf Moor early next month?

Incidentally, the same screen also displayed a statistic which claimed that Burnley hadnÃât won at either of Manchester CityÃâs homes at any time in the last fifty-five years

Leroy Sane soon made the score 3-1 and by the time Nick Pope took leave of his penalty area and his senses to allow Mendy to add a fourth, the game was over as a contest

Yes, there is a great deal of style, not to say beauty, in the way the Champions-elect go about their play, but the abiding image is of the unremitting, remorseless pressure which they apply

All-in-all, 2018 has started poorly for the Clarets, with yesterdayÃâs mauling coming after LiverpoolÃâs sickening stoppage-time winner on New YearsÃâ Day

Perhaps the squad needs an infusion of new blood in the transfer window, nothing dramatic, just a couple of new faces to freshen things up and maybe a tweak or two in the starting line-up?

Big Sam Vokes had a strong game yesterday, as did Matt Lowton

It could well now be the time for those two to take a more prominent role as the Clarets attempt to put four wheels back on their presently derailed wagon.ÃÂ