How Burnley's Masters Football Team Would Look in 2020

There's nothing quite like watching your club's old cult heroes battle it out on a six-a-side pitch, is there? Masters Football, ladies and gentlemen - how better to entertain yourself?!
Yes, here at 90min we are all feeling the full effects of our beloved game's absence.
There isn't a sight quite like a multitude of middle-aged men slumbering around as they strive to roll back the years, and remind spectators, teammates and opposition that they remain very much alive and kicking.
Now, ​Burnley and the word 'Masters' don't really go hand in hand. But, you wouldn't want to come up against a Clarets Masters side, that's for sure. It won't matter they've put on a couple pounds and lost all their hair.
They'll be sure to give you a right kicking, and drain all the joy one could hope for in a six-aside Masters matchup. 90min's Club Highlight: Being nicknamed 'Nik the Greek' by Burnley fans.

Club Lowlight:​ His last appearance was in Burnley's 7-2 home defeat to ​Sheffield Wednesday

The Greek shot-stopper turned into somewhat of a Clarets' cult hero during his time at Turf Moor. He almost reached 100 appearances, so that's pretty good.

Apparently he was known for his 'reactions' and 'shot-stopping ability'. Well, that's helpful considering he's a goalkeeper!

So enjoy Burnley fans, Nik the Greek is going to keep it calm between the sticks for this Masters side. 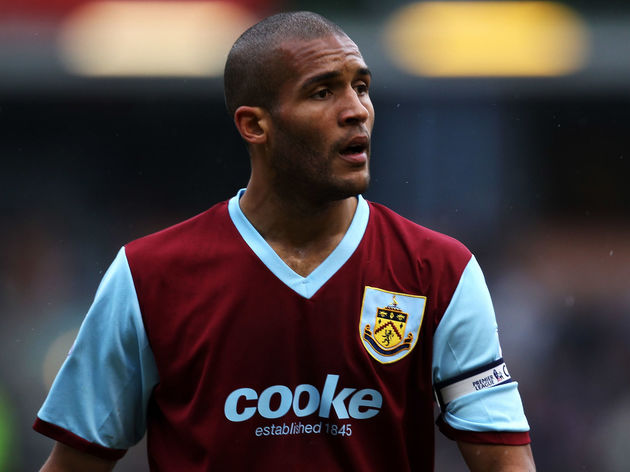 Club Highlight: Man of the match in 2009/10 play-off final victory over ​Sheffield United.

Club Lowlight:​ Relegation to the old Third Division with Blackpool.

Carlisle was a classic Burnley boy who spent five years in claret and blue. He racked up over 150 appearances, and grew to become a reliable option in the centre of defence.

He's an intelligent guy too, so we reckon he'd be an excellent organiser of this Masters side. In fact, he can be in charge of putting it all together! To be fair to Tyrone Mears, he was Burnley's Player of the season in his first full campaign at the club.

Unfortunately for him, this 'impressive' individual achievement is somewhat undermined by the fact that Burnley were relegated back down to the Championship at the end of that season.

Anyway, he'd form a no-nonsense partnership with Carlisle at the back. Obviously we're starting two centre-backs in Burnley's Masters side. It's a no brainer! Club Highlight: Fitting the criteria of being a classic Burnley player.

On account of his 35 years of age, Jones is just eligible for selection in this side. Lucky, it's quite challenging to locate loads of Burnley players who cut the mustard for this side.

Jones (the ex-​Manchester United prodigy - he made four appearances!) has over 130 Burnley games to his name. Club Highlight: Having a fun name!

Bikey was a classic Burnley player back in the day. Unfortunately for him, he was part of the team that were relegated from the ​Premier League in the same season they were promoted.

He started as a central midfielder, but transformed into a central defender because Burnley's manager at the time Brian Laws said he could be an 'outstanding centre-half'.

You can be the judge of that. But, Bikey gets in so he can zoom around the middle of the park! Club Highlight: Admitting he was addicted to the weights room.

Club Lowlight: Getting sent off two minutes into his full debut for a headbutt.

You need a bit of fun and games in your Masters side and Akinbiyi definitely fits the bill. Not many professional footballers can say they've been sent off on their debut. Not many can say it was after two minutes. None will say it was for a headbutt.

Hilarious. But, Akinbiyi was an alright goalscorer too. He scored 16 times during his first spell at the Clarets. And they just couldn't get enough of him - after moving to Sheffield United, he was back a year later!

It didn't quite go to plan - the player and his manager admitted it was because he just loved doing weights a bit too much. Classic! Anyway, he'll be able to bosh his fellow ex-professionals around with all the muscle he gained. Club Lowlight: They did this because he wasn't very good.

Another cult-hero for you, and there's no-one you'd want more on your bench than utility man Graham Branch. You have a job for him, he'll do it - even now!

After spending a whole entire eight years at Turf Moor - he must have really loved it - he deserves to be included in this Masters side.

Graham di Branchio never quite managed to nail down a position of his own. Why? He just wasn't a great specialist, that's all. Instead, he was one of those guys who worked his socks off. So a great player you can stick on when one of the other lads is tiring. Club Lowlight:​ Having a contract offer withdrawn after he asked for more time to think about it.

O'Connor made the exciting switch to Burnley on transfer deadline day in 2005. He would go onto feature over 130 times. Talk about value for money - he only cost £175,000!

Anyway, he never quite cut the mustard at Turf Moor and it cultivated in a rather hilarious contractual negotiation. His manager at the time, Owen Coyle, had offered O'Connor a new deal. The player asked for more time to mull it over.

What happened? Coyle didn't like that. He withdrew the offer and released the player. Poor guy! He'll have something to prove if he gets his chance from the bench in this Masters side. Club Lowlight:​ Fans said he was like "a dog with a balloon" - poor Moore!

Ian Moore fills the prestigious third slot on the bench of the Burnley Masters side. To be fair, he played over 200 times, so respect to you sir!

Apparently he was good at chasing down the keeper and forcing opposition mistakes. Good to know, and a lethal weapon that can lay in wait from the bench.