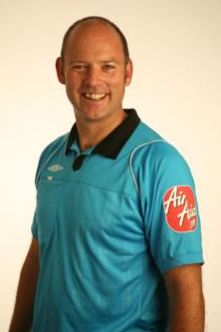 It will be his third Burnley game and the other two have both ended in victories, one at home and one on our travels.  The first of them was the home win against Barnsley two seasons ago and last season he refereed our first league win of the season at Derby.

Haines is actually a Londoner and started refereeing before his move north in 2000 after which he immediately joined the Wearside League before moving up, via the Northern League, to become a Football League referee for the 2007/08 season.

Considered a referee who doesn't overuse his cards, he reached three figures last season with 104 yellow and six red cards although that was in 35 games giving him an average of just about three yellow cards per game.

43 of those yellow cards went to home team players with 61 to away team players. Two of the players sent off were in Championship games. He dismissed Portsmouth's Luke Varney in a 1-0 defeat at Hull and Nathan Doyle of Barnsley in their 1-0 home win against Peterborough.