Former loan players Cahill and Anderson on the move 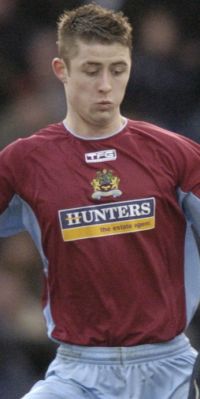 It had just about become a case of when Cahill would leave Bolton. They'd done their best to sell him during the summer and were desperate for him to go in this window to avoid him walking for nothing at the end of the season.

From the moment the window opened Chelsea were favourites and yesterday they confirmed the deal for an undisclosed sum that is believed to be considerably less than Bolton's valuation of him.

It's a long time since Cahill was at Turf Moor, coming on loan from Aston Villa during Steve Cotterill's first season as manager and he played a total of 32 games for us scoring one goal, the only goal in the 1-0 win at Stoke at the beginning of 2005.

He's also played on loan for Sheffield United before Gary Megson signed him for Bolton Wanderers, but he'd made it clear some months ago that he would not sign a new deal with the Horwich based club.

That led to the touting of him by manager Owen Coyle as he desperately tried to get some money for him and eventually he did with this deal. On signing, Cahill said: "Chelsea is a massive club, it is a club that looks to win trophies season in season out and it is a big opportunity for me to be a part of that. Opportunities like this you can't turn down."

Three seasons ago, we signed defender Russell Anderson on a season long loan from Sunderland. Unfortunately he suffered a cruciate ligament injury in just his fifth game for us, the Carling Cup win against Fulham, which ruled him out for the rest of the season.

Further injuries kept him out on his return to Sunderland in 2009/10 season and he eventually moved to Derby County. Last month his contract was terminated by mutual consent and today he's returned home to his first club Aberdeen for whom he played 320 times.

Today, Aberdeen confirmed that their former captain has re-signed for the club and he's immediately been handed the captaincy again by manager Craig Brown.

Brown said: "Russell has signed initially until the end of next season and, even although he is some weeks away from a return to full fitness, simply having him around the club again is a tremendous boost to everyone. Our medical team and the player are confident that he will make a full recovery.

"Russell is Aberdeen through and through and his influence both on and off the park will be a massive confidence boost for all of us here."