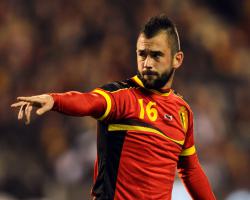 The 28-year-old has moved to east Lancashire for a fee in the region of ÃÂ£7.5million, surpassing the ÃÂ£6million the Clarets paid for Andre Gray last summer.

Here, football.co.uk looks at five things you may not know about Burnley's new central midfielder.

1) He was once on Manchester United's radar

Seven years ago Defour, then with Standard Liege, received a letter from United boss Sir Alex Ferguson after suffering a broken foot

In it the Scot told Defour he would "get in touch with your club" on his recovery process, sparking suggestions Ferguson would make a move for the midfielder when fit

Nothing materalised, though, and Defour would have to wait for his Premier League switch.

Having spent five years with Standard, Defour joined Porto only to return to Belgium in 2014 with Anderlecht, fierce rivals of his previous Belgian employees

On his first return to Liege, the home fans unfurled a banner which read 'Red or Dead' with a masked man holding Defour's decapitated head

Defour was so incensed by the constant abuse he received he twice booted the ball into the home end, earning a red card for his troubles.

That player is likely to be Frenchman Maxime Colin, who spent a season at Anderlecht when Defour was also on their books

Colin joined the Bees last summer and played in both games against the Clarets, when his side were beaten on each occasion.

Last July striker Jelle Vossen, who had spent most of the previous campaign on loan with Middlesbrough, moved to Burnley from Genk on a three-year deal

However, less than two months later and after making just five appearances, Vossen was sold to Club Brugge having failed to settle

It clearly did not put Sean Dyche off shopping in the Belgian market, though.

5) He was dismissed in his only World Cup outing

Although he was not at Euro 2016 along with his new team-mates Tom Heaton, Stephen Ward, Johann Berg Gudmundsson and Sam Vokes, Defour is one of the most experienced internationals on the Clarets' books

Having made his debut in 2006, he is closing in on a half-century of appearances for Belgium, whom he represented at the World Cup two summers ago

He was sent off in his only outing in that tournament against South Korea, though, and may cop some stick from colleague Vokes, whose goal for Wales helped end Belgium's run at the Euros.