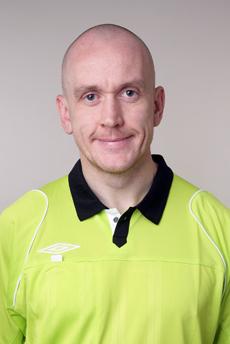 That game at Peterborough was his first Burnley game and, despite the defeat, there was nothing for us to be concerned about with his performance taking him to fourth place in the RATE THE REF table with a rating of 82.33 out of 100.

That game at London Road was only his second game at Championship level in his third season as a Football League referee; previously he'd refereed the 2010/11 game between Preston and Reading in which Preston's Darel Russell was sent off.

Most of his games are still in the lower leagues and tonight will be just his sixth Championship game this season in what will be his 29th game.

In the 28 games to date he's shown 72 yellow cards and just four red cards. Of those yellow cards, 37 have gone the way of home team players and 35 to away team players.

Three of the red cards have gone to away team players with one of those red cards in the Championship, that of Nottingham Forest's Guy Moussi in a game they won 2-1 at Blackpool.

His last game was the League One fixture between Wycombe Wanderers and MK Franchise a week last Saturday. The game ended 1-1 with yellow cards for Wycombe's Grant Basey and Stuart Lewis and Alan Smith (MKF).