First Burnley game in over six years for referee Drysdale 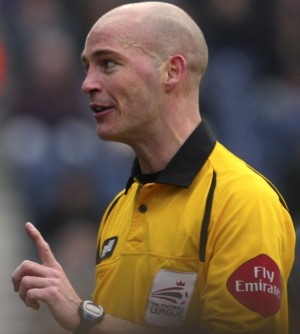 He refereed us three times during 2006, at Hull and Cardiff and then the home game against Southampton and it is fair to say he had three nightmare games although there were no complaints at the red card he gave Wayne Thomas in the third of those games.

He became a Football League referee ahead of the 2004/05 season and combines that with his career as an RAF Sergeant, based at RAF Coningsby in Lincolnshire, and it was a posting to Libya that saw him not referee a Football League game between November 2008 and October 2010.

His return was at Bradford City and a League Two game against Cheltenham and for much of the two years and more since he's refereed mainly in the lower two division, although eight of his 24 games this season have been in the Championship.

Those 24 games have seen him use his yellow card on 79 occasions and four times he's sent players off.

He's yellow carded 36 home players and 43 away players but all four players he's sent off have been playing for the home team. Two of them have been Championship players. He dismissed Nottingham Forest's Adlene Guedioura in their 3-1 City Ground win against Cardiff and more recently it was Dorian Dervite of Charlton who saw red in a 1-0 FA Cup defeat at the hands of Huddersfield at The Valley.

Last time out he refereed Doncaster's 2-0 home win against Leyton Orient in what was Brian Flynn's first game in charge last Saturday. There was just one yellow card in the game, to Doncaster's Paul Quinn.

It's over six years since I saw this referee and hopefully he's a lot better referee in 2013 than he was in those three games in 2006.