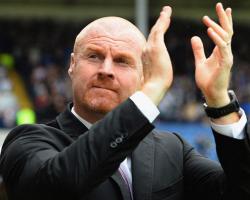 Manchester United yesterday became the latest to do so, following on from Spurs and Liverpool in previous weeks

But despite the disappointment of the result, there was nonetheless much about BurnleyÃâs play yesterday to provide encouragement that better times lay just around the corner

At no time could United claim to be in control of the game and at times they were hanging on with a degree of desperation, but the equaliser which BurnleyÃâs play undoubtedly merited never arrived

Hanging on and grinding out a 1-0 win is what Burnley have done to other clubs more than once this season, yesterday they had it done to them

Johann Berg GudmundssonÃâs free kick twanged the cross bar, Ashley Barnes and Sam Vokes both had headers narrowly wide and the best chance came when an inviting cross fizzed through the United six-yard box just begging to be turned in

Had a forward, whose instincts for such chances are generally sharper, been the closest Burnley player, rather than James Tarkowski; then the Clarets would surely have equalised

As it was, Anthony MartialÃâs goal settled the encounter and Burnley were left nursing another defeat, continuing a slide which, whilst not yet alarming, has definitely become more than frustrating

Watford, whose seasonÃâs trajectory has been similar to BurnleyÃâs, have today sacked Marco Silva, citing unwelcome interest from Everton as a disrupting factor

Sean Dyche was also strongly linked with the Everton vacancy but did not allow the speculation to interfere with his focus on the job in hand and neither Dyche, nor his employers on the Burnley board, will be moved to knee-jerk reactions over the dip in form from which the Clarets are currently suffering

Lennon would admittedly be an unusual signing for Dyche; once a teenage sensation, he is without doubt gifted, but also inconsistent, injury-prone and generally high-maintenance

Harnessing his talent will be a challenge for Dyche, but if he is able to do so he could provide Burnley with that extra special additional dimension they are so lacking at present.

Finally, in over half a century of watching football, never before have I witnessed the announcement of the refereeÃâs name before kick-off being greeted with such voluble groans of disappointment

During the game, Mike Dean continued to justify the reputation he has garnered amongst Burnley fans

Dave contributes regularly on behalf of Clarets Mad and will no doubt he hoping to write a happier tome following the final whistle at the home of Newcastle United on January 31st? (TEC).